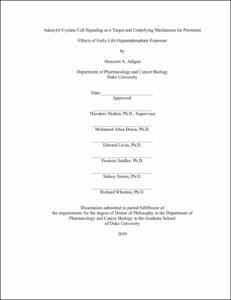 Organophosphates (OPs) are developmental neurotoxicants but also produce lasting effects on metabolism. This dissertation examines the cellular mechanisms underlying metabolic dysfunction after early-life OP exposure. We administered diazinon (DZN) or parathion (PRT) to rats on postnatal days (PN) 1-4 at doses straddling the threshold for cholinesterase inhibition and assessed the longitudinal effects on hepatic and cardiac cell function mediated through the adenylyl cyclase (AC) signaling cascade, which controls neuronal and hormonal inputs that regulate hepatic glucose metabolism and cardiac contractility. Specifically, we investigated if outcomes of metabolic dysfunction are related to hepatic AC dysregulation. In the liver, DZN elicited parallel upregulation of AC activity itself and of the responses to AC stimulants acting at beta-adrenergic receptors (BARs), glucagon receptors, or G-proteins. The effects intensified from adolescence to adulthood. In contrast, PRT elicited upregulation in adolescence that waned by adulthood. Effects on the liver were more substantial than those in the heart and a brain region (cerebellum) that shares similar AC cascade responses. These findings indicate that OPs produce lasting hepatic AC gain-of-function and alter the trajectory of hepatic cell signaling in a manner consistent with the observed emergence of prediabetes-like metabolic dysfunction. Since the effects are unrelated to cholinesterase inhibition, the various OPs differ in their net impact on AC signaling.

We then examined whether OPs directly affect the expression or function of AC signaling elements, using PC12 cells to evaluate effects on transcription of AC pathway genes and on protein function. Whereas different OPs had disparate effects on gene transcription, they had nearly identical effects at the protein level, suggesting that programming occurs post-transcriptionally. We further found that otherwise unrelated developmental toxicants (OPs, dieldrin, nickel) can nevertheless converge on similar outcomes for their impact on the AC pathway, providing a common pathway by which diverse agents can lead to metabolic dysfunction.

The standard view of OPs as developmental toxicants that exclusively target the nervous system requires substantial revision. Through their effects on hepatic cell signaling and other metabolic processes, early-life chemical exposures may play an important role in the worldwide increase in obesity and diabetes.