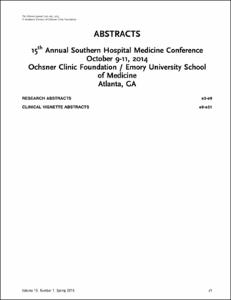 View / Download
56.2 Kb
Authors
O'Donnell, Christopher
Thomas, Samantha
Johnson, Crystal
Verma, Lalit
Bae, Jonathan
Gallagher, David
Repository Usage Stats
26
views
4
downloads
Abstract
Background: In the last 10 years, patient safety committees nationwide have focused on creating taskforces such as rapid response teams (RRTs) that can intervene when patients start to decompensate prior to a code. At Duke Regional Hospital, approximately 50% of RRT activations were found to occur during the first 24 hours of a patient’s stay. Unlike critical care medicine, internal medicine does not have a widely accepted scale to grade the severity of illness. A scale was developed by Edelson et al in 2011 to quantify the likelihood of decompensation. The Duke hospitalists adapted this scale and used it prospectively to determine whether there was a correlation in the presenting acuity of illness and the number of RRT interventions in the first 24 hours and to see if there would be a decrease from year to year. Methods: A patient acuity score was adapted with permission, and patients were graded prospectively from admission. Patient data from June to December 2013 was summarized using N (%) for categorical variables and mean (standard deviation) for continuous variables. Patients transferred to resident service were excluded from the analysis, making the effective sample size 4,322 patients. The differences in mean severity score by occurrence of an RRT intervention in multiple categories were examined using analysis of variance. The total number of RRT interventions (at any time, within 12 hours, and within 24 hours) and unplanned transfers for June to December in 2012 and 2013 were compared using Wilcoxon rank sum tests for independent nonparametric samples. Additionally RRT interventions were grouped by score of 5 and above vs 4 and below and analyzed via chi square test. Results: From June to December 2013, there were a total of 4,577 encounters by the hospitalists. A total of 4,322 patients met inclusion criteria. Ninety-two percent of the patients had a recorded acuity score. An RRT intervention occurred in 113 patients. Mean acuity scores were compared between subgroups. There were significant differences in mean acuity scores between patients who experienced an RRT intervention at any time and those who did not, patients who experienced an RRT intervention within 12 hours of admission and those who did not, patients who experienced an RRT intervention within 24 hours of admission and those who did not, and patients who underwent an unplanned transfer and those who did not (all P<0.007). It is notable that 100% of the level 7 scores that had a rapid response were transferred to the critical care unit, as well as 79% of the level 6 scores. There were no significant differences in the number of rapid responses between 2012 and 2013. Patients were then analyzed via chi square test in grouped distribution of scores of ‡5 and <5. Significant differences were seen in the total number of RRT interventions, the number of unplanned transfers and the number of RRTs within 24 hours. However, when looking at the grouping among patients with only RRT intervention, there was no significant difference between groups with a score ‡5 and those 4. Conclusion: A patient acuity scale to quantify how likely a patient is to have an adverse event has been shown to correlate with rapid responses and transfers to a higher level of care within the first 24 hours. Patients who had an RRT intervention had a higher score overall with a trend toward increasing transfer rates with elevated scores. Using this scoring system did not lead to a lower amount of rapid responses in comparing years; however, it could be used for selective monitoring to prevent sentinel events.
Type
Conference
Permalink
https://hdl.handle.net/10161/24128
Collections
More Info
Show full item record Associate Professor of Medicine
As Chief of Hospital Medicine programs at Duke University Health System (DUHS), my primary responsibility is leadership of a team of physician and administrative leaders that  positively impact the strategies, goals, and objectives of Hospital Medicine at our three hospitals. I am responsible for oversight of various programs that focus on excellence in clinical care, patient safety and quality, clinical education, and academics. I report to the DUHS Chief Medical Officer, General Internal