Explaining the Effects of Fiscal Shocks 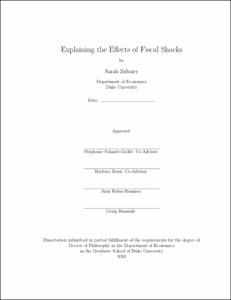 This dissertation is motivated by the fact that while the literature has had a great deal of success in developing empirical models for monetary policy analysis, the same can not be said for fiscal policy. This work advances our understanding of various issues in identification and modeling of fiscal policy shocks. In particular, the first two chapters work towards building a compelling empirical model for fiscal policy evaluation and the last chapter addresses the importance of fiscal shocks, along with monetary shocks in explaining aggregate macroeconomic fluctuations.

Chapter 1 identifies and explains the effects of a government spending shock. In response to a structural unanticipated government spending shock, output, hours, consumption and wages all rise, whereas investment falls on impact. An estimated dynamic general equilibrium model featuring deep habit formation successfully explains these effects. In particular, deep habits give rise to countercyclical markups and thus act as transmission mechanism for the effects of government spending shocks on private consumption and wages. In addition, I show that deep habits significantly improve the fit of the model compared to a model with habit formation at the level of aggregate goods.

While Chapter 1 considers public spending financed by lump-sum taxes, Chapter 2 further extends the framework to allow for distortionary taxes, and a more careful modeling of the government financing behavior. I use full information Bayesian techniques to estimate this dynamic stochastic equilibrium model, and characterize the dynamics of the economy in the case of both spending and tax changes. I estimate fiscal multipliers and find the multiplier for government spending to be 1.12, and the maximum impact is when the spending shock hits the economy. In addition, the model predicts a positive but small response of private consumption to increased government spending. The multipliers for labor and capital tax on impact are 0.13 and 0.33, respectively. The effects of tax cuts, on the other hand, take time to build, and exceed the stimulative effects of higher spending at horizons of 12-20 quarters. The expansionary effects of tax cuts are primarily driven by the response of investment. I also carry out several counterfactual exercises to show how alternative financing methods and expected monetary policy have consequences for the size of fiscal multipliers. In addition, I simulate the effects of the American Recovery and Reinvestment Act of 2009 in the context of this empirical model.

The final chapter, which is joint work with Barbara Rossi, analyzes the role of government spending shocks along with monetary policy shocks in explaining macroeconomic fluctuations, in a structural vector autoregression (VAR) where both shocks are identified simultaneously. Our main finding is that government spending shocks are relatively more important in explaining medium cycle fluctuations (defined between 32 and 200 quarters) and monetary shocks play a larger role in explaining business cycle frequencies (between 8 and 32 quarters). We also find that failing to recognize that both monetary and fiscal policy simultaneously affect macroeconomic variables might incorrectly attribute fluctuations to the wrong source.