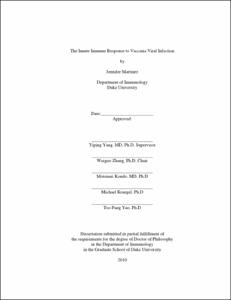 Vaccinia virus (VV) is the most thoroughly studied member of the Poxviridae family and the vaccine used to achieve the only successful eradication of a human disease. Over the years, it has proven itself as a useful tool for the study of antiviral immunity, vaccine development, and potentially cancer immunotherapy. VV is capable of eliciting a robust immune response; however the mechanisms by which VV accomplishes this task remain unknown. The overall goal of this thesis project is to determine how VV activates the innate immune system, and how this activation contributes to viral clearance in vivo. We determined that VV or VV-DNA activated the TLR8-MyD88 pathway in plasmacytoid dendritic cells (pDC), resulting in the production of type I interferons (IFN). We also demonstrated that TLR8-mediated production of type I IFN by pDC was crucial to efficient VV control and clearance in vivo. Moreover, we identified the polyA- and polyT-rich sequences in VV-DNA was the possible motif recognize by TLR8. Type I IFN, known for ability to establish the "antiviral state", are also critical mediators of NK cell activation. In the setting of VV infection, we demonstrated that direct action of type I IFN on NK cells, but not accessory cells such as DC, was necessary for NK cell activation in vivo. We further demonstrated that type I IFN-dependent activation of NK cells was required for optimal VV clearance in vivo. Given the importance of NK cells in anti-VV innate immunity, we next examined what role the TLR2-MyD88 pathway, critical for activation of cDC, played in the activation of NK cells. NK cells from TLR2-/- or MyD88-/- mice displayed a reduction in activation and cytolytic function, and this defect was independent of pro-inflammatory cytokine signaling. We were able to demonstrate that direct TLR2 signaling on NK cells was required for their optimal activation and function in response to VV infection. Moreover, we were able to demonstrate that TLR2-MyD88 signaling resulted in the activation of the PI3K-ERK pathway, which was necessary for NK cell cytotoxicity. In addition, we identified the NKG2D pathway as critical for efficient NK cell activation and function in response to VV infection, independent of the TLR2 pathway. Both the NKG2D and TLR2 pathways were crucial for optimal VV clearance and control in vivo. Collectively, this project illuminates the roles and mechanisms of the innate immune system in the control of VV in vivo.