From Dennis-the-Menace to Billy-the-Kid: The Evolving Social Construction of Juvenile Offenders in the United States From 1899-2007 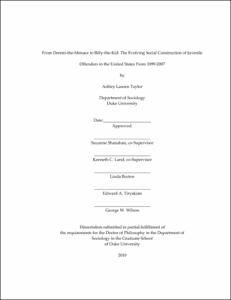 Few studies have historically assessed the surges and troughs of public perception regarding juvenile offenders across over a century of legislative and social change. Furthermore, a minority of juvenile crime investigations have holistically examined the interplay between changing demographic conditions (notably, economic stability, racial composition and crime rates) with its accompanying ideological shifts. Through a theoretical emphasis on social constructionism and moral panic theory, this dissertation illuminates the cyclical nature of juvenile justice reform and illustrates that panics regarding juvenile offenders are more closely related to fears regarding the maintenance of power and the insecurity that comes with historical change than with an authentic threat of juvenile crime. Over 9,000 records in The New York Times, Congressional record, and Supreme Court decisions were coded and analyzed to reveal three chronological partitions of the social construction of youthful offenders: (1) the 1890s-1930s during which the most destabilizing force to those in positions of power revolved squarely around urbanization, industrialization, and the waves of immigration from Eastern and Southern Europe; (2) the 1930s-1970s during which faith in juvenile offender rehabilitation was replaced with punitive policies stressing deterrence and an increased focus on the "problem" of racial minorities; (3) the 1970s-present which demonstrates the declining discussion of race in print media and legislative debates even as its effects in sentencing and prosecution grow in strength. This dissertation illuminates the ways in which insecurity and panic breed violence and expounds upon that notion to specify that how the violence manifests itself, whether through punitive policies or interpersonal crime, depends on the resources available and the historically-situated social norms. Over time, however, the explicit racial hostility in rhetoric and policy has been replaced with an evasion the recognition that race undoubtedly affects both juvenile justice policies as well as their implementation. In order to combat the inevitable instability that accompanies historical change, a resurgence of dialogue acknowledging the connection between race and juvenile justice is urged.