Household Debt Across the Life Course: An Analysis of the Late Baby Boomers 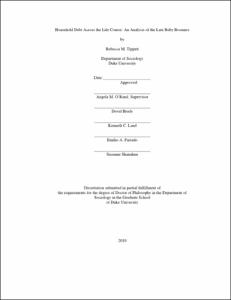 As an aggregate, American households have shown rising debt levels over the past few decades, yet we do not understand how debt varies within households over time and what factors influence this variation in a meaningful way. To date, household debt appears predominantly as a component of measures of net worth, obscuring heterogeneity in the meaning of debt within a household. Moreover, most studies focusing specifically on indebtedness rely on cross-sectional data. In addition, no cohesive theoretical model exists to account for changing patterns of debt. This dissertation seeks to fill these gaps. Utilizing a variety of methodological approaches and drawing on longitudinal data from the National Longitudinal Survey of Youth 1979, it adds sociological explanation to a social process that has been previously ignored and under-theorized.

First, drawing from literature in economics and sociology, I propose a dynamic, life course model of indebtedness that specifies three mechanisms driving differentiation in household indebtedness: institutional context (period), social heterogeneity, and patterned disadvantage, or structural risk. Second, I use multilevel logistic regressions to explore the association between the hypothesized mechanisms and the likelihood of holding non-collateralized debt. While experiencing negative life course risks increases the likelihood of holding debt, I find that occupying positions of structural disadvantage--being black, being in poverty--decreases the likelihood of holding debt, while having advantages--higher education, being married, holding assets--increases the likelihood of holding debt, pointing to distinct differences in who can access debt to buffer life course shocks and who cannot. Examining the interrelationships between debts and assets further underscores the tenuous economic well-being of the disadvantaged. I find that those most likely to experience negative life events are both less likely to have financial assets with which to buffer these events and more likely to experience constrained access to non-collateralized debt.

Third, I employ multilevel linear regressions to examine the association between the proposed mechanisms and three unique indicators of debt burden. I find that many of the standard coefficients included in models of net worth are not significant predictors of the level of non-collateralized, non-revolving debt, suggesting that we know much more about the correlates of income and wealth than we do household debt. Variation in debt burden may be better understood by heterogeneity in non-economic variables frequently not captured in survey research. To better explore this unobserved heterogeneity, I utilize latent class regression models to estimate the early life course trajectories of debt burden for the NLSY79 cohort. I find four distinct trajectories of indebtedness with varying consequences for later life financial outcomes. Overall, I conclude that household debt is nuanced and contextually contingent. More importantly, debt adds to our understanding of long-term stratification processes when studied as a unique indicator of inequality.