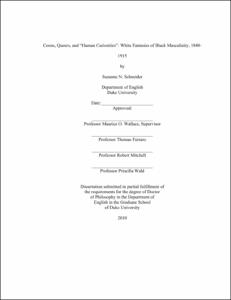 Forwarding a narrative that, in many ways, runs contrary to `official'/sanctioned accounts which designate the body of the black woman as the principal star of nineteenth-century racial science's empirical investigations and sexual exploitations, I propose instead a vision of our nation's 1800s that marks this era as the moment in American history in which Hottentot Venus turned Hot-to-trot-Penis. Remaining indebted to the works of Sander Gilman and his contemporaries, and paying special attention to the ways in which both the erotic vicissitudes and imperialist vagaries of the European empire effected a fairly fluid cross-Atlantic exchange during this time period, I locate the late 1840s and early 1850s as the seminal moment in which, through a collaboration of scientific, social, and popular texts the black male body specifically first becomes installed in this country, on the mainstages of both our early spectacular culture and the American psychic theater, as a `pornographic body': an indigenous site of sexual taboo upon and through which the dark fantasies of the Whites who had imported these bodies might be projected. Recognizing, in this mid-nineteenth century moment, what should be seen as a distinctive, while as yet unremarked, shift in both the discourse and displays offered by America's peculiar brand of ethnography as well as within our national arena--one which turns to and turns on the conception of the black male as sexual subject--my dissertation hopes to offer a better understanding of the compelling forces, both social and salacious, that might be said to account for this distinctly American, and distinctively perverse, representational refocusing.