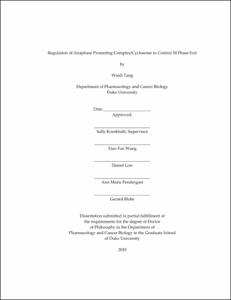 The Anaphase Promoting Complex/Cyclosome (APC/C) is a RING E3 ligase that plays essential roles both within and outside of the cell cycle. At the onset of anaphase, the APC/C targets cyclin B and securin for degradation, initiating chromosome separation and mitotic exit. Regulation of APC/C activity is critical for a functional cell cycle, and this is largely mediated by cytostatic factor (CSF) activity and the Spindle Assembly Checkpoint (SAC).

Prior to fertilization, vertebrate eggs are arrested in metaphase of meiosis II by CSF activity, a key component of which is the APC/C inhibitor Emi2. Although the roles and regulation of Emi2 in maintaining CSF arrest have been extensively studied, its function during the oocyte maturation process, especially at the meiosis I to meiosis II (MI-MII) transition, was not well understood. Studies presented in this dissertation characterize an Emi2-mediated auto-inhibitory loop of the APC/C that provides the molecular basis of a critical biochemical event during the MI-MII transition--the partial degradation of cyclin B. In brief, phosphorylation of the Emi2 N-terminus by Cdc2/cyclin B targets it for proteasomal degradation in meiosis I (MI). During anaphase of MI, the APC/C triggers its own inactivation by degrading cyclin B, therefore stabilizing its inhibitor, Emi2. The timely inactivation of APC/C activity prevents the complete inactivation of Cdc2 kinase, which is crucial for prohibiting S phase onset and parthenogenetic activation of the oocytes.

To better understand the regulation of the APC/C, a number of the studies presented here are aimed at identifying the mechanism for Emi2 inhibition of the APC/C. Many APC/C inhibitors have been reported to function as "pseudosubstrates", which inhibit the APC/C by preventing substrate binding. After carefully examining the ubiquitin reactions mediated by the APC/C in vitro, we have found that it is the last step in the ubiquitylation process, where ubiquitin is transferred from a charged E2 to the substrate, that is targeted by Emi2. In addition, biochemical studies have also revealed that Emi2 itself has RING-dependent ligase activity and this activity enables it to inhibit the APC/C in a sub-stoichiometrical manner.

Although the ultimate goal for both CSF activity and the SAC signaling pathway is APC/C inhibition, a much more complicated regulatory network is known to control SAC. Previous researches in our lab have identified Xnf7 to be an APC/C inhibitor that is required for the SAC pathway in Xenopus egg extract. In an effort to characterize the human Xnf7 homolog, we have found that Trim39, a protein that has been implicated in apoptosis regulation, is required for the SAC pathway in RPE cells. Like Emi2, both Xnf7 and Trim39 are RING E3 ligases whose activity is essential for their function. Interestingly, the ligase activity of both proteins appears to be regulated by the checkpoint. While we continue to characterize the roles and regulation of both Trim39 and Xnf7 in the SAC, future investigations into the mechanisms that underlie APC/C inhibition by all the three E3 ligases--Emi2, Xnf7 and Trim39--would be of great interest.