A PROCEDURAL REVIEW OF THE MASS PILOT WHALE STRANDING IN THE FLORIDA KEYS, 2003 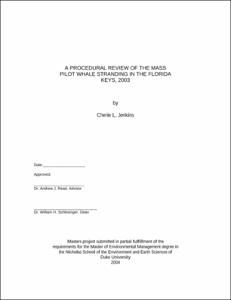 View / Download
195.4 Kb
Date
Author
Jenkins, Cherie L.
Advisor
Read, Andrew J
Repository Usage Stats
314
views
618
downloads
Abstract
On April 18, 2003, twenty-eight short-finned pilot whales stranded in the shallow waters near Content Keys Passage, about five miles north of Big Pine Key in the lower Florida Keys. Of the twenty-eight, 21 animals died at the site, were euthanized or moved back into deeper water and their whereabouts were unknown. Seven whales were moved to a rehabilitation site and after almost four months of care, four female juveniles and one male calf were released about 15 miles offshore in the Atlantic Ocean. The response, rehabilitation and release efforts during mass stranding events are challenging situations that require the cooperation of multiple organizations, including federal agencies, regional stranding networks, local marine mammal societies and volunteers. I examine the legislative and regulatory basis for stranding programs and the organizational structure that they establish, and evaluate conflicts that arose during this particular mass stranding of pilot whales. I use recommendations solicited from various professionals involved in all phases of the event to provide suggestions as to how this process could be improved upon during future events. I provide specific recommendations to address problems in communication among the multiple organizations, the lack of a clear chain of command, improper data collection and disagreements among veterinary staff as to the release of individual whales. Only by learning from previous experience and identifying strengths and weaknesses within current operations will stranding networks provide the care and support needed by animals under their care.
Type
Master's project
Department
Nicholas School of the Environment and Earth Sciences
Subject
Short-Finned Pilot Whales
Florida Keys
Stranding
Permalink
https://hdl.handle.net/10161/243
Citation
Jenkins, Cherie L. (2004). A PROCEDURAL REVIEW OF THE MASS PILOT WHALE STRANDING IN THE FLORIDA KEYS, 2003. Master's project, Duke University. Retrieved from https://hdl.handle.net/10161/243.
Collections
More Info
Show full item record