THE FORM AND FUNCTION OF SCALLOP MANTLE EYES 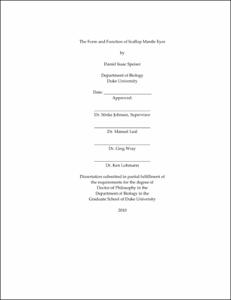 Scallops, a family of swimming bivalve mollusks, have dozens of eyes arrayed along the edges of their valves. Relatively little is known about the form and function of these unusual eyes. To learn more about them, we studied the visually influenced behavior of scallops, as well as the morphology and spectral sensitivity of their eyes. Of particular interest was whether or not the simple neural architecture of these animals constrains the number of visually-influenced behaviors they can perform. We were also interested to learn whether scallop eyes, despite providing relatively poor visual acuity, show optical refinements, such as corrections for spherical and chromatic aberration, that are known from the eyes of animals with better vision. In the following dissertation, Chapter 2 discusses the visually-influenced behaviors of scallops. It has been argued that bivalve mantle eyes only act as predator-detectors, but the behavioral trials described in this chapter suggest that vision may serve additional purposes in scallops. For example, it was found that visual cues relating to flow conditions may influence scallop feeding behavior. Chapter 3 presents a comparative study of scallop eye morphology. Here, it is found that eye morphology varies considerably between scallop species and that highly mobile scallops have better vision than less mobile or immobile species. Evidence is also presented that one of the two scallop retinas may perform tasks of similar importance to all species, such as predator detection, while the other retina may perform tasks more important to mobile species, such as those associated with the visual detection of preferred habitats. Chapter 4 investigates the spectral sensitivity of the two retinas in the mantle eyes of two scallop species. It is found that there is both inter- and intra-specific variation in scallop spectral sensitivity and that color perception in scallops may be influenced by both environmental light conditions and chromatic aberration caused by their lens. The research in this dissertation provides insight into how vision functions in animals that, like scallops, have a vast number of eyes, but a limited capacity for neural processing. Despite such limitations, it is evident that scallops display a wide range of visual behaviors and have eyes with highly-refined optics.