Mourning in America: Racial Trauma and the Democratic Work of Mourning 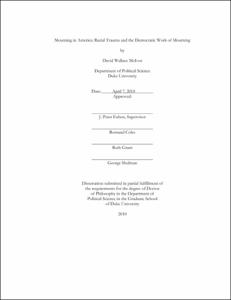 This dissertation argues for a version of democratic theory, and institutions of democratic practice, that would call for and help to nurture a form of civic identity--individual and collective--committed to a "work of mourning" over the historical and enduring traumas surrounding racial discrimination and violence in the United States. By a reading of psychoanalytic theory in conversation with political and social theory, I show that mourning should be considered less as a limited response to particular loss--one that will resolve itself after a certain lapse of time--than as a process of identity formation through recognition of, and reflection on, formative traumas in the democratic polity. Using the work of Melanie Klein in particular, I argue that the work of mourning not only implies the working through of mundane losses and traumas, but the development of a certain identity (in what Klein calls the "depressive position") that is sensitive to the larger scenes of persecution and violence that shape the social and political landscape. For Klein, mourning is ultimately the process of establishing internal objects that enrich the self's capacity to mitigate its hatred, fear, envy, and greed with reparative guilt and love. Klein's descriptions of inter-subjective mourning have relevance outside the comparatively narrow confines of the analytic situation. I argue that Klein's theories of mourning and identity can enhance collective efforts to address the traumas surrounding racial violence and discrimination in the United States. I illustrate this connection by examining the experience of the Greensboro Truth and Reconciliation Commission (GTRC), which operated in Greensboro, North Carolina from 2004 to 2006.