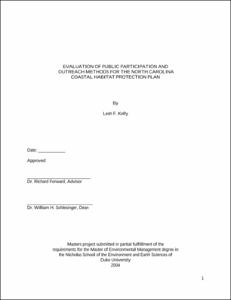 View / Download
195.9 Kb
Date
Author
Kelly, Leah F.
Advisor
Forward, Richard B
Repository Usage Stats
467
views
314
downloads
Abstract
Public participation has become an important component to many decision-making processes. It has many benefits, both for the participant as well as the decision-maker. It provides education and raises public awareness on important issues. It can reduce conflict between competing interest groups. It increases the willingness to accept programs to which participation is contributed. As part of the Fisheries Reform Act of 1997, the North Carolina Division of Marine Fisheries (DMF) is developing an integrated approach to coastal management. The North Carolina Coastal Habitat Protection Plan (CHPP) will be the first attempt at regulatory co-management of commercially important coastal fish habitats. Within the scope of this project, DMF has included a public participation aspect to the writing and researching process. To increase the level of cooperation and support to this new management approach, DMF and the North Carolina Coastal Federation began an outreach campaign that started with the distribution of educational materials and resulted in the execution of 10 public meetings. I conducted a survey of participants who attended the ten public meetings. I assessed the representation of participating interest groups, the distribution tactics of the publications, and the effectiveness of the educational portion of the meetings. I also evaluated the respondents’ satisfaction with the level of knowledge gained from the outreach materials and the meetings. Anticipated future involvement in the process was an indicator of the success of the campaign. The results of this project indicate that the meetings and public outreach campaign succeeded in many ways. They provided education for the participating citizens, and they increased interest for future involvement in environmental issues. However, representation of target populations, such as fishermen and developers, did not meet the expressed goals of NCCF and DMF. Distribution tactics and outreach procedures should be reanalyzed to further increase the interest of the CHPP process for broader involvement of interest groups. As this is an ongoing process, it is important to see how public participation benefits citizens so that the decision-makers can work to maintain, or increase citizens’ level of interest in the CHPP process.
Type
Master's project
Department
Nicholas School of the Environment and Earth Sciences
Subject
North Carolina Division of Marine Fisheries (DMF)
Outreach
Public Participation
North Carolina Coastal Habitat Protection Plan (CHPP)
Permalink
https://hdl.handle.net/10161/244
Citation
Kelly, Leah F. (2004). Evaluation of Public Participation and Outreach Methods for the North Carolina Coastal Habitat Protection Plan. Master's project, Duke University. Retrieved from https://hdl.handle.net/10161/244.
Collections
More Info
Show full item record