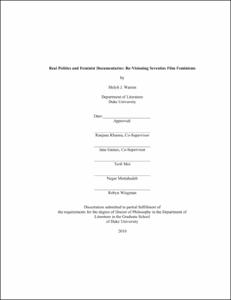 For a brief moment in feminist time, from 1968 to 1974, women's documentaries were influential in the emerging field of feminist film studies and for feminist activism. By the late sixties feminists had identified visual representation within popular culture, film, and the media as one of the central battlegrounds for women's activism. For feminist filmmakers, documentary, with its alleged superlative grip on truth and transparency, seemed to provide an ideal counterpoint to the perceived mis-representation of "real" women in dominant, narrative cinema. Within seventies feminist film theory, however, scholars elaborated a gender-specific take on the ideological critique of realism that disavowed women's documentary films as naïve, unsophisticated, and complicit with the ideologies of patriarchy and capitalism.

In this project, I recast realism as an unruly and contradictory set of codes and conventions that generate oppositional and revolutionary political documentaries. In contrast to the dominant anti-realist reception of feminist documentaries in seventies feminist film theory then, I argue that these documentaries contain unacknowledged nuance and neglected visions of the political aspirations (however flawed) of second wave feminism. Key figures in feminist political theory, such as Nancy Fraser and Hannah Arendt, shed light on the political and subjective configurations brought forth in several feminist documentaries, including I Am Somebody (1969), Janie's Janie (1971), The Woman's Film (1971), and Joyce at 34 (1972), and Self-Health (1974), which depend rather on second wave aspirations of collectivity and agency, and the power of self-authorship and experience.