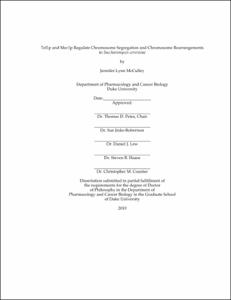 Cancer cells often have elevated frequencies of chromosomal aberrations, and it is likely that loss of genome stability is one driving force behind tumorigenesis. Deficiencies in DNA replication, DNA repair, or cell cycle checkpoints can all contribute to increased rates of chromosomal duplications, deletions and translocations. The human ATM and ATR proteins are known to participate in the DNA damage response and DNA replication checkpoint pathways and are critical to maintaining genome stability. The <italic>Saccharomyces cerevisiae</italic> homologues of ATM and ATR are Tel1p and Mec1p, respectively. Because Tel1p and Mec1p are partially functionally redundant, loss of both Tel1p and Mec1p in haploid yeast cells (<italic>tel1 mec1</italic> strains) results in synergistically elevated rates of chromosomal aberrations, including terminal duplications, chromosomal duplications, and telomere-telomere fusions. To determine the effect of Tel1p and Mec1p on chromosome aberrations that cannot be recovered in haploid strains, such as chromosome loss, I investigated the phenotypes associated with the <italic>tel1 mec1</italic> mutations in diploid cells. In the absence of induced DNA damage, <italic>tel1 mec1</italic> diploid yeast strains exhibit extremely high rates of aneuploidy and chromosome rearrangements. There is a significant bias towards trisomy of chromosomes II, VIII, X, and XII, whereas the smallest chromosomes I and VI are commonly monosomic.