"All Hail King Jesus": The International Worship Symposium and the Making of Praise and Worship History, 1977–1989 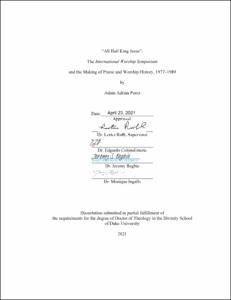 Since the late 1940s, Praise and Worship has emerged as a new mode of liturgical expression out of North American Pentecostalism. Despite a variety of conflicts that have marked its adoption, it has found a home in a wide swath of global Protestant churches and it is estimated that nearly a quarter of the world’s Christians practice some form of Praise and Worship today. Praise and Worship today is known primarily by the expectation that participants will encounter God’s presence through music.This dissertation presents a historical case study of the International Worship Symposium (IWS) as a lens into Praise and Worship history. The IWS was an annual Praise and Worship teaching event that began in 1977 and peaked in the late 1980s. The theology and practice of IWS worship was built on the central claim that God “inhabits” or “is enthroned upon” the praises of God’s people (from Psalm 22:3)—an insight first popularized by Latter Rain theologian and pastoral leader Reg Layzell. I begin with the background of the Latter Rain Revival of 1948 and the impact of Reg Layzell’s theology on the churches and individuals that birthed the IWS. Through conference teaching materials, personal interviews, and other primary sources, I explore how IWS teachers expanded on this theology by the 1980s and used the Tabernacle of David as typological prism for understanding worshipers’ special access to God through Praise and Worship, especially music. My argument concludes with a case study of the critical, early influence that the IWS had on the theology and music of a major—though little-researched—player in the worship music industry: Integrity’s Hosanna! Music. Through its influence both on the thousands of individual conference participants and on the leadership of this one major company, the IWS had a central role in the dissemination or Praise and Worship’s practices and theology. In summary, I suggest that it is precisely the biblically-derived theological and liturgical understandings of the IWS that were central to the development of Praise and Worship (and its music) in the 1980s. Despite its importance, liturgical studies scholarship has largely ignored the role of Latter Rain Pentecostals and the IWS. Instead, scholars have constructed a music-industrial history of Praise and Worship that focuses primarily on musical style and attributes Praise and Worship’s origins to the Jesus People Movement of the late 1960s and 1970s. I argue that is actually Pentecostals affiliated with the Latter Rain Revival of 1948, including those who originated and led the IWS, who were most critical to the construction and mainstream dissemination of Praise and Worship during the critical period of development, which was the 1980s. In addition to focusing on the wrong people and the wrong time period, scholars have often overlooked the underlying liturgical theology of Praise and Worship, which is, I suggest, the most critical element in its historical development. Thus, the dissertation offers liturgical history as a productive frame for engaging musicological and ethnomusicological research on present-day sites while expanding the scholarship of liturgical history on the Latter Rain stream of Pentecostal worship that has contributed to contemporary transformations in global Protestant worship today.