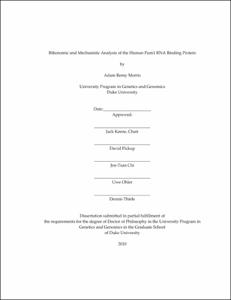 Much of the regulation of gene expression occurs at the posttranscriptional level, and much of this regulation is controlled and coordinated by RNA binding proteins (RBPs). Many RBPs have multiple mRNA targets, and the proteins encoded by these targets often share functional relationships, forming posttranscriptional RNA operons. These operons often reflect the function of the RBP, thus determination of the genome-wide targets of RBPs allows insight into their functions.

The PUF family of RBPs is characterized by the presence of an extremely well conserved RNA binding domain, typically consisting of 8 repeats of an RNA binding motif, with each repeat binding to one RNA base. PUF proteins are proposed to have an ancestral role in self-renewal of stem cells and have been shown to affect a number of developmental processes. Human and other vertebrate genomes contain two canonical PUF genes, Pum1 and Pum2, and at the outset of this study there was very little known about functions or targets of either protein, especially Pum1.

In order to identify the genome-wide targets of human Pum1 we used RNA immunoprecipitation followed by microarray, or RIP-Chip, analysis. RIP-Chip allowed us to identify Pum1 target mRNAs in human HeLa cells. We found that there were numerous functional relationships among the proteins encoded by these mRNAs, forming putative RNA operons. Some of these potential operons are progression of cell cycle, cell differentiation and proliferation, and regulation of transcription. We were also able to find a consensus Pum1 binding motif, UGUAHAUA, in the 3' UTRs of Pum1 target mRNAs.

The genome-wide targets of PUF proteins from other species have been previously identified, and by comparing the targets of human Pum1 to targets of Drosophila Pumilio and yeast Puf3, both of which bind to the same RNA sequence as Pum1, we determined that there has been evolutionary rewiring of regulation by Puf proteins. While the PUF RNA binding domain and consensus binding sequence have remained almost identical through evolution, the surrounding protein sequence and the mRNAs bound have changed dramatically, indicating that evolutionary rewiring is occurring in a modular fashion.

After identifying Pum1 associated mRNAs, we went on the study the function of Pum1. Through Pum1 knockdown assays we found that Pum1 enhances decay of target mRNAs, and that this effect is likely due to Pum1 enhancing deadenylation of these mRNAs. We also showed by immunofluorescence that Pum1 protein has a cytoplasmic granular subcellular localization and upon oxidative stress relocates to stress granules but not processing bodies. We were, however, unable to detect any difference in Pum1 mRNA targeting after stress. We were also unable to detect any changes in progression through cell cycle after Pum1 knockdown.

In this study we identified the genome-wide mRNAs associated with Pum1, determined functional relationships among these targets related to the proposed ancestral role of PUF proteins in self-renewal of stem cells, and identified a sequence motif to which Pum1 binds in these mRNAs. We also demonstrated that Pum1 enhances decay of associated mRNAs, and that this effect is likely due to Pum1 enhancing deadenylation of associated mRNAs. These results provide a description of mRNA targets and mechanisms of action of Pum1 proteins, which will provide a strong foundation for future experiments to further explore the functions of the Pum1, especially as they relate to human stem cells.