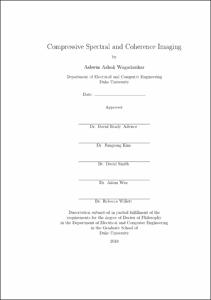 This dissertation describes two computational sensors that were used to demonstrate applications of generalized sampling of the optical field. The first sensor was an incoherent imaging system designed for compressive measurement of the power spectral density in the scene (spectral imaging). The other sensor was an interferometer used to compressively measure the mutual intensity of the optical field (coherence imaging) for imaging through turbulence. Each sensor made anisomorphic measurements of the optical signal of interest and digital post-processing of these measurements was required to recover the signal. The optical hardware and post-processing software were co-designed to permit acquisition of the signal of interest with sub-Nyquist rate sampling, given the prior information that the signal is sparse or compressible in some basis.

Hypothesizing that turbulence between the scene and CASSI would introduce spectral diversity of the point spread function, CASSI's snapshot spectral imaging capability could be used to image objects in the scene through the turbulence. However, no turbulence-induced spectral diversity of the point spread function was observed experimentally. Thus, coherence functions, which are multi-dimensional functions that completely determine optical fields observed by intensity detectors, were considered. These functions have previously been used to image through turbulence after extensive and time-consuming sampling of such functions. Thus, compressive coherence imaging was attempted as an alternative means of imaging through turbulence.

Compressive coherence imaging was demonstrated by using a rotational shear interferometer to measure just a 2D subset of the 4D mutual intensity, a coherence function that captures the optical field correlation between all the pairs of points in the aperture. By imposing a sparsity constraint on the possible distribution of objects in the scene, both the object distribution and the isoplanatic phase distortion induced by the turbulence could be estimated with the small number of measurements made by the interferometer.