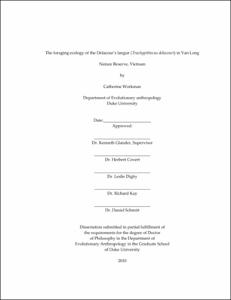 Delacour's langurs (<italic>Trachypithecus delacouri</italic>), one of the six limestone langur taxa of Southeast Asia, inhabit isolated, rugged limestone karst mountains in Northern Vietnam, although the reason for their current restriction to this habitat is unclear. The occupation of karst habitats by limestone langurs has been attributed to the refuge these rocky outcrops provide in a dramatically anthropogenically-altered landscape. Conversely, several ecological explanations have been proposed to account for their distribution, though the ecology of wild Delacour's langurs had yet to be studied. In this dissertation, I quantified the foraging ecology of Delacour's langurs living on Dong Quyen Mountain in Van Long Nature Reserve, Vietnam to address if these langurs show special adaptations to limestone karst or if they are exploiting a refuge habitat into which they have been pushed. I quantified their foraging ecology by systematically investigating their diet and feeding ecology, the chemisty of their eaten leaves, and the locomotions and substrates they utilized.

From August 2007 through July 2008, I used instantaneous focal-animal sampling during all-day follows of Delacour's langurs on Dong Quyen Mountain. I collected data on activity budget, diet, and positional behavior. I also collected samples of soils and eaten and uneaten leaves which were tested for phytochemical content.

With nearly 79% leaves in the diet, 60% of which were young leaves, Delacour's langurs are among the most folivorous of studied colobines, and- along with the closely related <italic>T. leucocephalus</italic> of southern China- the most folivorous of the Asian langurs. None of the plants that were important in the Delacour's langur diet were endemic limestone plants, and therefore feeding dependence alone cannot explain the current distribution of limestone langurs on karst habitat. Langurs ate leaves with high protein:fiber ratios, and despite a high percentage of carbon in the soil, young leaves were available throughout the year and plant defenses did not seem to have a large impact on eaten leaves. Delacour's langurs spent nearly 80% of their time on rocks. Quadrupedalism was their dominant locomotor style, more than double that of climbing. Terrestrialism, however, does not adequately describe the dangerous locomotion of these langurs; they are cliff-climbers. Delacour's langurs leapt only 6% of the time, much less than other African and Asian colobines, but their morphology (intermembral index) does not suggest terrestrialism or an evolutionary adaptation for limestone karst. Delacour's langurs appear to be a flexible taxon occupying a refuge habitat into which they have pushed. However, this restricted limestone habitat does not appear limiting in resources. The population at Van Long Nature Reserve is increasing which means that- if protected- this local population can rebound. Persistent hunting for traditional medicine and the more recent emergence of quarrying limestone for cement, however, threatens their survival.