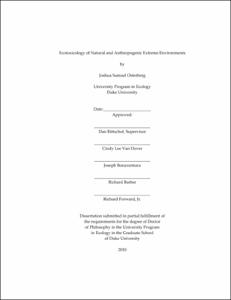 Reactive oxygen species (ROS) are produced endogenously in all aerobes and are induced by environmental stressors. ROS oxidize and disable essential cellular components such as DNA, proteins, and lipid membranes. Exposure to metals, polycyclic aromatic hydrocarbons (PAHs), and some pesticides can induce oxidative stress in marine invertebrates. All aerobic organisms have a network of antioxidants and enzymes to quench ROS and prevent oxidative damage. This dissertation examines antioxidant and oxidative stress biomarkers in endemic molluscs and crabs from two natural extreme environments: deep-sea hydrothermal vents in the Lau and North Fiji Basin, and cold seeps in the Gulf of Mexico. In addition, the acute toxicity and sub-lethal effects of four insecticides and an herbicide are examined in the estuarine blue crab, <italics>Callinectes sapidus</italics>. Blue crabs are North Carolina's most important fishery species and are frequently found in agricultural drainage ditches, an example of an anthropogenic extreme environment.

Total glutathione, catalase, superoxide dismutase, and lipid peroxidation levels were of the same respective order of magnitude in the two vent gastropods, <italics>Alviniconcha</italics> sp. and <italics>Ifremeria nautilei</italics>, and vent mussel, <italics>Bathymodiolus brevior</italics>. These biomarkers activities were similar to those from previous reports on Mid-Atlantic Ridge mussels, except for ~100-fold higher lipid peroxidation levels among Lau molluscs. Principal component analysis (PCA) of mollusc tissue-specific biomarker levels grouped individuals by species rather than by site.

Pesticides were acutely toxic to blue crabs in the order of Lambda-cyhalothrin > imidacloprid &#8776; aldicarb > acephate &#8776; Roundup® (glyphosate). Megalopae were almost always more sensitive to pesticides than early stage juveniles. Commercial formations of pesticides generally showed similar toxicity to active ingredients alone. Exposure to LC20 levels of acephate, aldicarb, imidacloprid and Roundup significantly increased the frequency of juvenile mortality after molting. There was no significant change in total glutathione or lipid peroxidation of exposed megalopae. Lambda-cyhalothrin-, imidacloprid-, and aldicarb-based products have the potential to cause acute toxicity and molting-related mortality in shallow creeks and ditches.