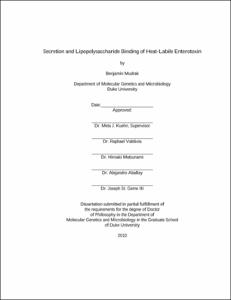 Enterotoxigenic <italic>Escherichia coli</italic> (ETEC) is a leading cause of morbidity and mortality worldwide. The causative agent of traveler's diarrhea, ETEC is often associated with cholera-like disease, especially in developing countries. One major virulence factor released by ETEC is the heat-labile enterotoxin LT, which upsets the balance of electrolytes in the intestine. LT is highly similar to cholera toxin (CT) produced by <italic>Vibrio cholerae</italic>, both in structure and function. The toxin consists of a single catalytically active A subunit and a ring of five B subunits mediating its binding and secretion. Previous work from our lab has shown that, after export by the type II secretion (T2S) system, LT associates with lipopolysaccharide (LPS) on the bacterial surface. However, little is known about what identifies LT as a T2S substrate, and the portion of the toxin that mediates LPS binding has not previously been defined. Site-directed mutagenesis of residues in a peripheral sugar binding pocket of the toxin was performed, revealing mutations that affect its binding to LPS, as determined by an in vitro cell surface binding assay. One binding mutant, which is expressed and secreted at wild-type levels from ETEC, holds particular promise for further studies of the role of the LT-LPS interaction. Interestingly, some mutations made affected the secretion of the toxin as detected by ganglioside-binding ELISAs of cell-free supernatant, and several mutations affected both secretion and LPS binding. These mutations identify residues of the toxin that are involved in its secretion and association with LPS. In addition, we introduced mutations affecting the secretion of LT into CT, due to the high similarity between the two toxins. While one mutation affects the secretion of each, other mutations affect one toxin but not the other. These results demonstrate that LT and CT are recognized in different ways during T2S. Combined with an analysis of the effects of secretion mutations on the stability of the toxin, the results described here highlight the delicate balance between structure and function of the LT B subunit.