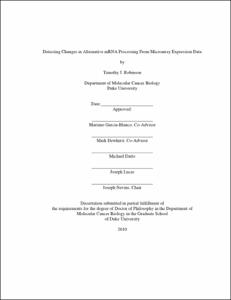 Alternative mRNA processing can result in the generation of multiple, qualitatively different RNA transcripts from the same gene and is a powerful engine of complexity in higher organisms. Recent deep sequencing studies have indicated that essentially all human genes containing more than a single exon generate multiple RNA transcripts. Functional roles of alternative processing have been established in virtually all areas of biological regulation, particularly in development and cancer. Changes in alternative mRNA processing can now be detected from over a billion dollars' worth of conventional gene expression microarray data archived over the past 20 years using a program we created called SplicerAV. Application of SplicerAV to publicly available microarray data has granted new insights into previously existing studies of oncogene over-expression and clinical cancer prognosis.

Adaptation of SplicerAV to the new Affymetrix Human Exon arrays has resulted in the creation of SplicerEX, the first program that can automatically categorize microarray detected changes in alternative processing into biologically pertinent categories. We use SplicerEX's automatic event categorization to identify changes in global mRNA processing during B cell transformation and show that the conventional U133 platform is able to detect 3' located changes in mRNA processing five times more frequently than the Human Exon array.