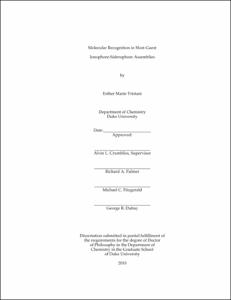 This work examines the characterization of supramolecular assemblies and, more specifically, host-guest complexes involved in molecular recognition events. The supramolecular assemblies studied take root from metal ion delivery in biological uptake pathways, specifically the delivery of iron to microbial cells. These assemblies are studied in an effort to further understand the nature of molecular recognition events, specifically the nature and strength of interactions between a host and a guest, and possible applications of these systems.

The development of a mass spectral method by which to characterize supramolecular assemblies involving the cation binding hosts 18-crown-6, benzo-18-crown-6, dicyclohexano-18-crown-6, and dibenzo-18-crown-6 macrocycles, and the linear ionophore lasalocid with cationic guests, including substituted protonated amines and the iron siderophore ferrioxamine B is presented. Methodology was developed using ESI-MS to successfully quantitate host-guest interactions in binary and complex mixtures. Binding constants were obtained in the range of log Ka = 3 - 5 and correspond to similar systems previously studied in the literature. The studies presented here further our understanding of the molecular recognition events that must occur between a siderophore and a receptor and provide an improved method by which to measure the strength of their interaction.

The effects of redox hosts on host-guest complex formation with ferrioxamine B and the characterization of the host-guest complexes formed and the strength of the interactions between them were studied using cyclic voltammetry, ESI-MS, FAB-MS and ITC. A shift in redox potential towards more positive values is observed upon addition of a cationic siderophore guest to a solution of a redox-active para-Wurster's aza crown or mono-substituted Wurster's aza crown macrocycle. Mass spectral evidence indicates the formation of a host-guest complex between the cationic siderophore and the redox host. A redox switch mechanism is proposed, whereby the redox state of the host influences the binding affinity between the host and guest and, consequently, host-guest complex formation. These systems offer a unique means by which to modulate the uptake or release of ionic guests from a cavity by using externally controlled methods and can be applied to selective metal ion compartmentalization.

Finally, the application of supramolecular assemblies as a tool in the field of drug delivery is presented. The covalent attachment of an antimalarial drug, artemisinin, by our collaborators to a siderophore produced by M. Tuberculosis, mycobactin, facilitates the subsequent delivery of the drug into the microbial cell by taking advantage of the natural biological iron uptake pathway. Here, the molecular recognition event and supramolecular assembly of interest is that occurring between the siderophore-drug assembly and the microbial receptor. Characterization of the siderophore-drug assembly using cyclic voltammetry shows that there is an interaction between the Fe-mycobactin and artemisinin when these are covalently attached in the form of a conjugate. Increased current output is observed due to an intramolecular electron transfer between the two components. Based on these in vitro data, we propose a redox mechanism by which the drug-siderophore conjugate exhibits a therapeutic effect in vivo.