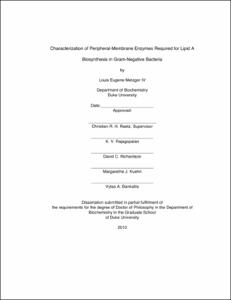 Gram-negative bacteria possess an asymmetric outer membrane in which the inner leaflet is composed primarily of phospholipids while the outer leaflet contains both phospholipids and lipopolysaccharide (LPS). LPS forms a structural barrier that protects Gram-negative bacteria from antibiotics and other environmental stressors. The lipid A anchor of LPS is a glucosamine-based saccharolipid that is further modified with core and O-antigen sugars. In addition to serving a structural role as the hydrophobic anchor of LPS, lipid A is recognized by the innate immune system in animal cells and macrophages. The enzymes of Lipid A biosynthesis are conserved in Gram-negative bacteria; in most species, a single copy of each bio-synthetic gene is present. The exception is lpxH, which is an essential gene encoding a membrane-associated UDP-2,3-diacylglucosamine hydrolase, which catalyzed the attack of water upon the alpha-phosphate of its substrate and the leaving of UMP, resulting in the formation of lipid X. Many Gram-negatives lack an lpxH orthologue, yet these species must possess an activity analogous to that of LpxH. We used bioinformatics approaches to identify a candidate gene, designated lpxI, encoding this activity in the model organism Caulobacter crescentus. We then demonstrated that lpxI can rescue Escherichia coli deficient in lpxH. Moreover, we have shown that LpxI possesses robust and specific UDP-2,3-diacylglucosamine hydrolase activity in vitro. We have developed high-yield purification schema for Caulobacter crescentus LpxI (CcLpxI) heterologously expressed in E. coli. We crystallized CcLpxI and determined its 2.6 Å x-ray crystal structure in complex with lipid X. CcLpxI, which has no known homologues, consists of two novel domains connected by a linker. Moreover, we have identified a point mutant of CcLpxI which co-purifies with its substrate in a 0.85:1 molar ratio. We have solved the x-ray crystal structure of this mutant to 3.0 Å; preliminary comparison with the product-complexed model reveals striking differences. The findings described herein set the stage for further mechanistic and structural characterization of this novel enzyme.

In this work, we also isolate and characterize LpxB, an essential lipid A biosynthetic gene which is conserved among all Gram-negative bacteria. We purify E. coli and Hemophilus influeznea LpxB to near-homogeneity on a 10 mg scale, and we determine that E. coli LpxB activity is dependent upon the bulk surface concentration of its substrates in a mixed micellar assay system, suggesting that catalysis occurs at the lipid interface. E. coli LpxB partitions with membranes, but this interaction is partially abolished in high-salt conditions, suggesting that a significant component of LpxB's membrane association is ionic in nature. E. coli LpxB (Mr ~ 43 kDa) is a peripheral membrane protein, and we demonstrate that it co-purifies with phospholipids. We estimate, by autoradiography and mass-spectrometry, molar ratios of phospholipids to purified enzyme of 1.6-3.5:1. Transmission electron microscopy reveals the accumulation of intra-cellular membranes when LpxB is massively over-expressed. Alanine-scanning mutagenesis of selected conserved LpxB residues identified two, D89A and R201A, for which no residual catalytic activity is detected. Our data support the hypothesis that LpxB performs catalysis at the cytoplasmic surface of the inner membrane, and provide a rational starting-point for structural studies. This work contributes to knowledge of the small but growing set of structurally and mechanistically characterized enzymes which perform chemistry upon lipids.