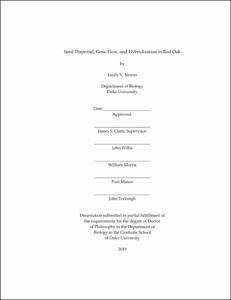 <p>Understanding the ecological and evolutionary responses of plant species to shifts in climate (and other rapid environmental perturbations) will require an improved knowledge of interactions between ecological and evolutionary processes as mediated by reproduction and gene flow. This dissertation research examines the processes of seed dispersal, intra- and inter-specific gene flow, and reproductive success in two red oak populations in North Carolina; the variation in these processes from site to site; and their influence on genetic structure, population dynamics, and migration potential.

<p>Using genetic and ecological data collected from two large long-term study sites, I develop a hierarchical Bayesian model to identify the parents of sampled seedlings and characterize the scale of effective seed and pollen dispersal. I examine differences in scale of dispersal between the Appalachian and Piedmont sites in light of the spatial genetic structure and ecological differences of the two sites. I then use the pedigree and dispersal estimates derived from these analyses to examine variation in reproductive success and to test hypotheses about the causes and consequences of such variation. Using parentage estimates and measures of genetic differentiation between species, I study the likely extent of hybridization in these mixed-species secondary forests. Finally, using the SLIP stand simulator, I explore the implications of new genetic dispersal estimates for migration potential in oaks.

<p>I find that effective seed dispersal distances are longer than estimated using seed trap data. While at the Piedmont site the large number of seedling found >100 m from their mother trees suggests that animal dispersers play a vital role, at the Appalachian site seedling distributions conform more closely to the original gravity-created pattern of seed density. Individual trees vary widely in their reproductive success. Seedling production was found to be positively associated with annual seed production, but exhibited hump-shaped or reversing relationships with age (suggesting the effect of senescence) and growth rate (suggesting tradeoffs in allocation). Germination fraction was negatively associated with fecundity, suggesting that density-dependent mortality may be acting on the high concentrations of seeds near highly fecund adults. Due to overlapping generations and variation in individual reproductive success, effective population size is estimated to be less than half the size that numbers of "adult" individuals would suggest, with consequences for the relative strength of drift and selection. Hybridization may boost effective population size somewhat; my analyses suggest that inter-specific gene flow is common at both study sites. Finally, simulations show that dispersal has a relatively stronger effect on migration rate and population growth than fecundity or size at maturity, and that genetic estimates of seed dispersal can yield significantly higher rates of migration and/or population persistence than seed-trap based estimates under both competitive and non-competitive conditions.