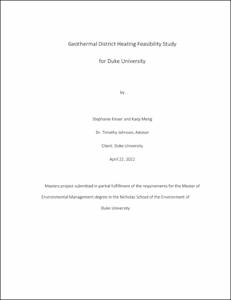 View / Download
2.7 Mb
Date
Authors
Kinser, Stephanie
Meng, Kaiqi
Advisor
Johnson, Timothy
Repository Usage Stats
34
views
32
downloads
Abstract
Recognizing the importance of renewable energy in combating climate change, Duke University has set a goal to become carbon neutral by 2024 from a 2007 baseline. To fulfill the goal, Duke is keen for an alternative to the natural gas that generates steam to meet heating demand on campus. Duke believes geothermal energy is a potential alternative. Our study explores the feasibility of building a direct use geothermal system on Duke’s west campus. To assess the feasibility, our study includes four methodologies: building a geothermal model to estimate the necessary flow rates to meet campus’ heating demand, calculating emission reductions, conducting a geospatial analysis to select potential sites, and estimating the costs to construct and operate the geothermal system. Duke is located in a low-temperature geothermal basin, making it difficult to access geothermal resources. An enhanced geothermal system (EGS) utilizes hydraulic fracturing to create man-made fractures in the rock and a reservoir to harness geothermal in low-temperature basins. With an EGS, we analyze how geothermal can be applied to Duke’s existing steam and hot water district systems. Modeling an EGS that could meet 10%-80% of campus’ steam load, we find that the necessary flow rates range from approximately 18,534 lbm/hr with a geothermal temperature of 250°F if meeting only 10% of steam load to approximately 186,00 lbm/hr with a geothermal temperature of 212°F and meeting 80% of steam load. All the modeled flow rates are reasonable when compared to similar EGS projects in the U.S. Our emissions reductions analysis demonstrates that there is a linear relationship between the load provided by geothermal and the resulting emissions reductions, meaning that if EGS generates 80% of the steam load then 80% of the current steam emissions would be reduced. Our geospatial analysis identified eleven potential sites to site an EGS if used for the hot water district system and sixty-two sites if used for the steam district system. We calculated that the average construction cost for a single well is $5.6 million dollars, the average distribution cost is $700,000 for hot water pipes and $900,000 for steam pipes, and the average annual operation cost for an EGS is $200,000. Each aspect of our analysis confirmed that geothermal may be feasible to use for Duke’s heating needs if the geothermal temperature gradient below Duke is sufficient. Therefore, our recommendation is that Duke University should pursue further research of an EGS for campus heating and consider the following next steps. Recommended Next Steps: • Wait for further evaluation until Duke researchers drill a test well to better understand the geology and geothermal conditions of the Triangle area. • Use GEOPHIRES software to better predict the flow rate and costs of geothermal. • Drill a test well on Duke’s campus to assess the geology, thermal gradient, and rock permeability below campus. • Rerun our model and the GEOPHIRES model with updated data inputs. • Determine whether to go forward with an EGS for Duke’s campus.
Type
Master's project
Department
Nicholas School of the Environment
Subject
geothermal
district heating
enhanced geothermal system
Permalink
https://hdl.handle.net/10161/24860
Citation
Kinser, Stephanie; & Meng, Kaiqi (2022). Geothermal District Heating Feasibility Study for Duke University. Master's project, Duke University. Retrieved from https://hdl.handle.net/10161/24860.
Collections
More Info
Show full item record