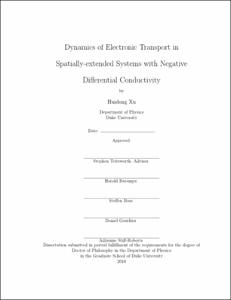 Negative differential conductivity (NDC) is a nonlinear property of electronic transport for high electric field strength found in materials and devices such as semiconductor superlattices, bulk GaAs and Gunn diodes. In spatially extended systems, NDC can cause rich dynamics such as static and mobile field domains and moving charge fronts. In this thesis, these phenomena are studied theoretically and numerically for semiconductor superlattices. Two classes of models are considered: a discrete model based on sequential resonant tunneling between neighboring quantum wells is used to described charge transport in weakly-coupled superlattices, and a continuum model based on the miniband transport is used to describe charge transport strongly-coupled superlattices.

The superlattice is a spatially extended nonlinear system consisting a periodic arrangement of quantum wells (e.g., GaAs) and barriers (e.g., AlAs). Using a discrete model and only considering one spatial dimension, we find that the boundary condition at the injecting contact has a great influence on the dynamical behavior for both fixed voltage and transient response. Static or moving field domains are usually inevitable in this system. In order to suppress field domains, we add a side shunting layer parallel to the growth direction of the superlattice. In this case, the model includes both vertical and lateral spatial degrees of freedom. We first study a shunted weakly-coupled superlattice for a wide range of material parameters. The field domains are found to be suppressed for superlattices with small lateral size and good connection between the shunt and the quantum wells of the superlattice. As the lateral size of the superlattice increases, the uniform field configuration loses its stability to either static or dynamic field domains, regardless of shunt properties. A lower quality shunt generally leads to regular and chaotic current oscillations and complex spatio-temporal dynamics in the field profile. Bifurcations separating static and dynamic behaviors are characterized and found to be dependent on the shunt properties. Then we adopt the model to study the shunted strongly-coupled superlattice with the continuum model. Key structural parameters associated with both the shunt layer and SL are identified for which the shunt layer stabilizes a uniform electric field profile. These results support the possibility to realize a SL-based THz oscillator with a carefully designed structure.

Another important behavior of the static field domains in the weakly-coupled superlattice is bistability, i.e., two possible states (i.e., electric field configurations) for a single voltage. Noise can drive the system from one of these states (the metastable state) to the other one (the globally stable state). The process of escape from the metastable state can be viewed as a stochastic first-passage process in a high-dimensional system that possesses complex stability eigenvalues and for which a global potential energy function does not exist. This process is simulated using a stochastic differential equation system which incorporates shot noise. The mean switching time &tau; is fitted to an exponential expression <italic>e</italic><super>(Vth-V)<super>&alpha;</super>/D</super>, where Vth denotes the voltage at the end of the current branch. The exponent &alpha; in the fitting curve deviates from 1.5 which is predicted for a generic one dimensional system. We develop an algorithm to determine an effective locally valid potential. Principal component analysis is applied to find the most probable path for switching from the metastable current state.