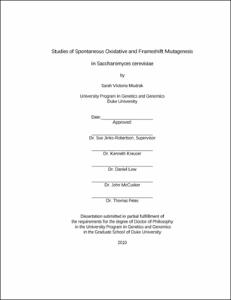 Preserving genome stability is critical to ensure the faithful transmission of intact genetic material through each cell division. One of the key components of this preservation is maintaining low levels of mutagenesis. Most mutations arise during replication of the genome, either as polymerase errors made when copying an undamaged DNA template or during the bypass of DNA lesions. Many different DNA repair proteins act both prior to and during replication to prevent the occurrence of these mutations. Although the mechanisms by which mutations occur and the various repair proteins that act to suppress mutagenesis are conserved throughout all species, they are best characterized in the yeast <italic>Saccharomyces cerevisiae</italic>. In this work, we have used this model system to study two types of spontaneous mutagenesis: oxidative mutagenesis and frameshift mutagenesis. In the first part of this work, we have examined mutagenesis that arises due to one of the most common oxidative lesions in the cell, 7,8-dihydro-8-oxoguanine or GO. When present during replication, these GO lesions generate characteristic transversion events that are accurately repaired by the mismatch repair pathway. We provide the first evidence that a second pathway involving the translesion synthesis polymerase Pol&eta acts independently of the mismatch repair pathway to suppress GO-associated mutagenesis. We have also examined how differences in replication timing during S phase contribute to variations in the rate of these mutations across the genome. In the second part of this work, we have examined how spontaneous frameshift mutations are generated during replication. While most frameshift mutations occur in regions of repetitive DNA, we have designed a system to examine frameshifts that occur in very short repeats (< 4 nucleotides) and noniterated sequences. We have examined the patterns of frameshifts at these sites and how the mismatch repair pathway acts to suppress these mutations. Together, the experiments presented here provide further insight into the different mechanisms that suppress and/or influence rates of oxidative mutagenesis and describe a system in which we have begun to characterize how frameshift mutations are generated at very short repeats and non-repetitive DNA.