ANALYSIS OF THE DEPARTMENT OF DEFENSE’S POLICIES TOWARD PROTECTED SPECIES 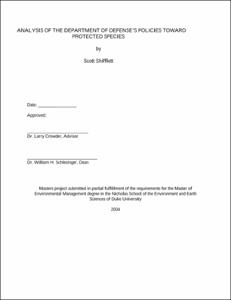 View / Download
186.8 Kb
Date
Author
Shifflett, Scott
Advisor
Crowder, Larry B
Repository Usage Stats
329
views
3,062
downloads
Abstract
After the terrorist attacks on September 11, 2001, the United States has had an increased interest in national defense and military readiness. Current Department of Defense spending has increased substantially over the past year in the areas of national defense and military readiness. Early attempts to weaken the Endangered Species Act and the Marine Mammal Protection Act within the US House of Representatives were blocked. However, the $400 billion defense appropriation bill, Public Law 108-136, seeks to weaken the Endangered Species Act and the Marine Mammal Protection Act to improve military readiness and national defense. Section 318 of the defense appropriation bill seeks to weaken the Endangered Species Act by precluding the designation of critical habitat on military installations. Section 319 of the bill seeks to weaken the Marine Mammal Protection Act by allowing the Navy to conduct research and training necessary to national defense even if those activities kill marine mammals. A policy design theory analysis shows that the Department of Defense has two different standards for land and marine species; land based organisms will receive high protection under the law, however, marine based organisms will receive minimal or no protection. The rationale and assumptions of section 318 seem to be sound because of the long running tradition of successes of endangered species management on military installations and the limited inclusion of critical habitat in endangered species management. More research needs to be conducted on the impact of the SURTASS LFA sonar system on marine mammals before the assumptions and rationale of section 319 can be determined to be correct.
Type
Master's project
Department
Nicholas School of the Environment and Earth Sciences
Subject
Department of Defense
Endangered Species Act (ESA)
Marine Mammal Protection Act (MMPA)
SURTASS LFA sonar system
Permalink
https://hdl.handle.net/10161/249
Citation
Shifflett, Scott (2004). ANALYSIS OF THE DEPARTMENT OF DEFENSE’S POLICIES TOWARD PROTECTED SPECIES. Master's project, Duke University. Retrieved from https://hdl.handle.net/10161/249.
Collections
More Info
Show full item record