Assessing the effects of urbanization on land use land cover changes and land surface temperatures in Sejong, South Korea 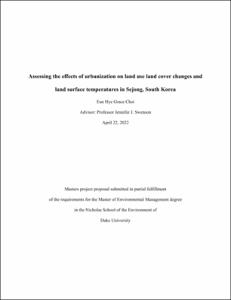 View / Download
912.4 Kb
Date
Author
Choi, Eun Hye (Grace)
Advisor
Swenson, Jennifer
Repository Usage Stats
82
views
50
downloads
Abstract
Urban heat islands (UHI) result from replacing natural landscapes with dense concentrations of pavement and other surfaces that absorb and retain heat, resulting in greater temperatures than outlying rural areas and a negative influence on people's health. Sejong, with its fast and high-density urbanization, presents itself as a useful case for examining the UHI effect in a newly built city. With countries increasingly relocating cities and administrative centers, whether due to pollution, over-population, or flooding risk, it is crucial to understand the experiences of nations that have completed the shift, allowing the formulation of suitable policy measures for smarter and more sustainable development. Thus, this research examines the effects of land-use/land-cover (LULC) changes on land surface temperatures (LSTs) over a 12-year timespan for a capital city built from the ground up using Landsat 5, 8, and MODIS remotely-sensed imagery. To observe correlations between land-use percentage coverage and surface temperatures, the LST and land-use classification mapping for the full study area is derived from Landsat imagery in summer dates of 2004, 2009, 2013, and 2020. This study also explores the relationship between increased LST intensity and urban growth, as well as changes in greenness (NDVI: Normalized Difference Vegetation Index) as a result of translating MODIS' monthly raster values into a time series for a number of different places that have undergone both more and no urbanization. Furthermore, the current study aims to determine changes of LULC and their impacts on the UHI intensity in different urban areas by using LST data collected in 2020 and linking it to indices that mark different urban features. LSTs of different LULC were analyzed both during the daytime and nighttime using ECOSTRESS. The findings for LULC analysis show that the amount of built-up area increased considerably from 2004 to 2020 (34%). In addition, the LULC analysis results demonstrate that the urban expansion witnessed in Sejong was due to the conversion of agricultural land (-43%) to built-up land. From 2004 to 2020, LST ranges were 21-34°C in 2004, 24-39°C in 2009, 16-40°C in 2013, and 23-47°C in 2020, indicating a significantly increasing trend. In addition, between 2004 and 2020 there was an increase in study area mean LST from 25.69°C to 35.89°C. Overall, a correlation between the greatest LST increases and increased land development was observed, while the lowest LST represented non changing vegetation cover. Additionally, the LST maps reveal that high LST values are concentrated in the most populous towns of Sejong. It was found that typical LSTs for the populous towns range between 30 to 43° C for the summer months in 2020. The mean NDVI for the non-changing rural and urban conversion areas was 0.5 and 0.24, respectively. The gradient of UHI intensity analysis indicates that urban areas experienced a 1.92°C higher LST on average compared to rural areas. The strongest UHI demonstrated a 3.38°C higher LST and -0.449 lower NDVI compared to the rural areas. According to the Kendall correlation test, the UHI and NDVI differences have a negative correlation of 0.55 (Kendall correlation test). The time of day exhibited different effects of ECOSTRESS-derived LST depending on different land features. Lastly, the mean LST results in 2020 indicate that urban heat island intensity varied among cities with very similar NDVI results.
Type
Master's project
Department
Nicholas School of the Environment
Subject
Land surface temperature, Land Use / Land Cover, Urban heat island, Urbanization
Permalink
https://hdl.handle.net/10161/24902
Citation
Choi, Eun Hye (Grace) (2022). Assessing the effects of urbanization on land use land cover changes and land surface temperatures in Sejong, South Korea. Master's project, Duke University. Retrieved from https://hdl.handle.net/10161/24902.
Collections
More Info
Show full item record