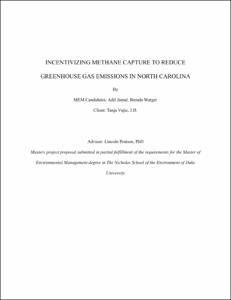 View / Download
689.8 Kb
Date
Authors
Warger, Brenda
Jamal, Adil
Advisor
Pratson, Lincoln
Repository Usage Stats
65
views
48
downloads
Abstract
Currently, the vast majority of manure lagoons on North Carolina hog farms are uncovered and emit substantial amounts of methane gas into the open air. In fact, of the state’s greenhouse gas emissions, 11% are methane, with the largest contributors being waste management and agriculture (manure management in particular). While a few North Carolina policies have directly or indirectly functioned to reduce methane emissions from hog farms, methane emissions are not being reduced at the scale possible. We evaluate three alternatives for further decreasing emissions from hog farms: (1) methane capture and flare, (2) methane capture and onsite energy generation, and (3) methane capture and participation in the renewable natural gas market (RNG). The priority in evaluating these methods is speed of implementation and low cost to maximize farm participation in reducing emissions reductions in the near term. Data used includes information from the North Carolina Department of Environmental Quality (DEQ) on all permitted hog farms, including facility names, types of hogs raised, allowable count of hogs, and expiration dates. We also draw upon the Duke report conducted by Darmawan Prasodjo et al. entitled “A Spatial-Economic Optimization Study of Swine Waste-Derived Biogas Infrastructure Design in North Carolina” to gain insight on the cost effectiveness of sourcing from clustered networks of farms for RNG projects, and for determining the amount of methane per permitted farm. These emission amounts were used to estimate emission reductions achieved by flaring the methane and CO2 conversion. The reductions were calculated using multipliers for non-fossil origin methane published by the Intergovernmental Panel on Climate Change in its Sixth Assessment Report. Abatement levels are provided in terms of CO2 equivalent (CO2e) emissions on both 20-year timeframes and 100-year timeframes. The reductions exclude methane emissions from eight large farms that according to the US EPA and the Department of Agriculture AgSTAR collaborative program, will be participating in methane abating RNG projects in the near term. Our key findings are as follows: ● If all permit-active farms in North Carolina that are not already participating in upcoming RNG projects were to cover their lagoons, capture the collected biogas, and flare the biogas, the resulting amount of avoided methane emissions would be 20.8 million metric tons of CO2e on a 20-year timeframe, and 5.73 million metric tons of CO2e on a 100-year timeframe. ● To contextualize this amount of methane, we took the 5.73 million metric tons of CO2e and compared it to the reductions needed in order to meet North Carolina’s primary Clean Energy Plan goal of 70% reductions from the electricity sector from 2005 levels by 2030. We found that the 5.73 million metric tons of CO2e are about 28% of the needed reductions. ● Our supplementary analysis of opportunities with on-site energy generation found that biogas-derived methane could replace at least 24% of on-farm propane use in North Carolina. Based on these findings, we recommend: ● The methane capture and flare alternative to the status quo may be the most prudent option for North Carolina to reduce its greenhouse gas emissions and meet critical climate goals. Flaring is relatively inexpensive and fast to implement in comparison to the two other waste-to-energy methods (onsite energy & RNG). ● The North Carolina legislature should develop and pass a mandate on natural gas companies to reduce their greenhouse gas emissions associated with their fuels. In the near term, natural gas companies would be incentivized to buy greenhouse gas offsets specifically from farms currently capturing and flaring methane. In the later term, natural gas companies may gradually work towards supporting the capture and refinement of biogas into RNG as this offers cost savings. ● For the health of neighboring residents and the political success of any methane reduction program in NC hog farms, Environmental Justice concerns need to be addressed. Low income and of color neighboring communities experience extreme odor conditions & water contamination risks in a documented pattern consistent with the phenomenon of environmental racism. The General Assembly is advised to develop legislation to require the use of ESTs and more rigorous soil and air testing to monitor for contamination.
Type
Master's project
Department
Nicholas School of the Environment
Subject
Methane
Hog Farming
North Carolina
GHG Emissions
Permalink
https://hdl.handle.net/10161/24905
Citation
Warger, Brenda; & Jamal, Adil (2022). Incentivizing methane capture to reduce greenhouse gas emissions in North Carolina. Master's project, Duke University. Retrieved from https://hdl.handle.net/10161/24905.
Collections
More Info
Show full item record