The Game of Giving Back: Re-thinking Corporate Capitalism and the Trend of Corporate Social Responsibility 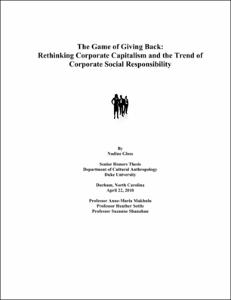 View / Download
3.3 Mb
Date
Author
Gloss, Nadine
Repository Usage Stats
533
views
2,943
downloads
Abstract
Should corporations take on responsibilities towards society beyond the production of goods and services? Can there be a motive beyond the profit motive? The following thesis will be an overview and a critique of corporate social responsibility (CSR), a trend that has gained greater visibility in the corporate business world for the last twenty years. The idea of CSR will be presented as an agent for modern multinational corporations to connect with the greater society, against the background of its free market capitalist foundation. A focused case study of CSR in the Bayer Healthcare Corporation will take place. The fieldwork for this thesis took place in the cities of Berlin, Germany and Durham, North Carolina, examining personal accounts and perceptions of western corporate culture in the twentieth century, and its influence on people within as well as outside of the corporate setting. The concept of corporate personhood in the legal and social sense will be challenged, in favor of the view that corporations are ultimately profit-seeking machines that are incapable of responding as real humans. In view of the modern corporation's purpose and relationship with society, I will argue that CSR is not a sustainable part of the corporate agenda and should not be seen as an indication that corporations are capable of operating for ends beyond profit. The CSR discourse raises critical questions about western people's relationship with the modern corporation and the functionality of the current free market capitalist system in America.
Type
Honors thesis
Department
Cultural Anthropology
Subject
CSR
capitalism
Bayer Healthcare
Berlin, Germany
corporations
Marcel Mauss
Permalink
https://hdl.handle.net/10161/2491
Citation
Gloss, Nadine (2010). The Game of Giving Back: Re-thinking Corporate Capitalism and the Trend of Corporate Social Responsibility. Honors thesis, Duke University. Retrieved from https://hdl.handle.net/10161/2491.
Collections
More Info
Show full item record