Explorations of Black Health in America: The Effects of Trust on Health Care Utilization between U.S.-Born Black Americans and Black Foreign-Born African Immigrants 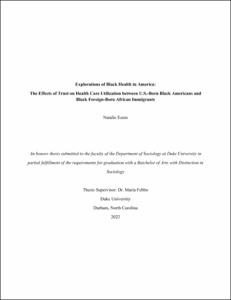 View / Download
436.7 Kb
Date
Author
Ezem, Natalie
Advisor
Febbo, Maria
Repository Usage Stats
85
views
34
downloads
Abstract
Historically, those that identify with the African diaspora have had a complicated and understudied relationship with the United States medical system. Available literature makes generalizations related to different populations across the African diaspora because they are all labeled under the “black” racial group. Consequently, this qualitative study investigated the impact of trust on health care utilization between black foreign-born African immigrants, including first and second-generation immigrants, compared to black Americans born in the United States. There were six U.S.-born black American participants and five black foreign-born African immigrants, resulting in a total of eleven in-depth interviews. When evaluating the role of trust in using resources within the healthcare system across both study populations, there seemed to be no clear conclusion on its impact. Some participants considered trust as one of their top three factors influencing how they utilized health care resources, while others indicated that it was not important to them at all. Some participants also noted that trust interacted with their personal identifiers – such as gender, race, and socioeconomic status – and their health care utilization. Additionally, the study revealed a high level of trust in individual providers but not the healthcare system as an institution for U.S.-born black Americans. On the other hand, black foreign-born African immigrants from West Africa had a significantly higher level of trust in the United States healthcare system compared to those from the Central, Eastern, and Southern regions of Africa. While there is variability in trust between the sample populations, participants mentioned that their level of trust in the United States healthcare system and their usage of resources would increase if there was more staff diversity, improvements in cultural competency surrounding different medical practices, and greater accessibility to quality care, especially in low-income communities.
Type
Honors thesis
Department
Sociology
Subject
Health care utilization
Black Americans
African immigrant
Trust
United States healthcare system
Qualitative study
Permalink
https://hdl.handle.net/10161/24921
Citation
Ezem, Natalie (2022). Explorations of Black Health in America: The Effects of Trust on Health Care Utilization between U.S.-Born Black Americans and Black Foreign-Born African Immigrants. Honors thesis, Duke University. Retrieved from https://hdl.handle.net/10161/24921.
Collections
More Info
Show full item record