“The Word of God in the Hearts of All Men”: Hans Denck and Anabaptist Universalism 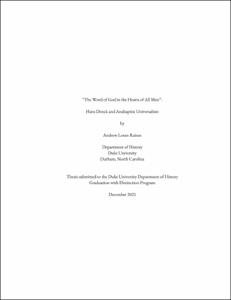 View / Download
19.1 Mb
Date
Author
Raines, Andrew Loran
Advisor
Robisheaux, Thomas
Repository Usage Stats
38
views
52
downloads
Abstract
Throughout the sixteenth century, magisterial Protestants condemned Anabaptists for various of their tenets, from pacifism to proto-communism, facets that have attracted much scholarly commentary. Yet, another cause for Anabaptists’ sixteenth-century condemnation—their alleged universalism, the belief that hell is temporary and all souls will reach heaven in time—has received little attention. Official magisterial condemnations do not specify which Anabaptists held to this view. And the universalism of the man most often associated with the doctrine by sixteenth-century commentators, Hans Denck, has been called into question recently. Utilizing letters, treatises, and volumes of the period, this thesis examines the life and thought of Hans Denck as a representative of Anabaptist universalism. The conclusions reached are that he was in fact universalist, his universalism could have been inspired by several different influences, and that his teaching—though few in disciples—had a far-reaching impact.
Type
Honors thesis
Department
History
Subject
Anabaptist
Universalism
Reformation
Religion
Hell
Religious Tolerance
Permalink
https://hdl.handle.net/10161/24947
Citation
Raines, Andrew Loran (2021). “The Word of God in the Hearts of All Men”: Hans Denck and Anabaptist Universalism. Honors thesis, Duke University. Retrieved from https://hdl.handle.net/10161/24947.
Collections
More Info
Show full item record