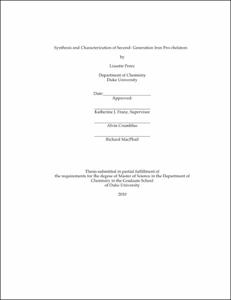 Excessive amounts of labile metals such as iron, zinc, and copper have been found in the brains of patients diagnosed with various neurodegenerative diseases, which include Alzheimer's and Parkinson's disease. Iron and copper can participate in the Haber-Weiss cycle forming reactive oxygen species, ROS, which can induce cell death. In vivo, these labile metals act catalytically regenerating additional ROS.

It has recently become evident that these neurodegenerative diseases are complex and have various targets for therapy. Described herein are the newest approaches to tackling those multifaceted issues using multifunctional chelators as well as an in depth look at a specific class of iron binding pro-chelators. Researchers have taken advantage of properties that increase cell and blood brain barrier, BBB, permeability, increase antioxidant capabilities, increased selectivity for metals in damage prone environments, lower A-beta peptide aggregation, and inhibit key enzymes associated with disease pathways.

Our research group has described sets of masked chelators, which have the potential for selectivity binding iron and copper in damage prone environments. QBP, a hydroxyquinoline-based pro-chelator was recently shown to inhibit further A&#946; aggregation and diminish copper's reactivity while BSIH, a salicylaldhyde isonicotinic hydrazone pro-chelator, has been shown to react selectively with hydrogen peroxide revealing an active chelator able to bind iron. Described in this thesis is a set of iron pro-chelator derivatives of the parent compound, BSIH. These masked chelators can potentially reveal high affinity metal ligands when oxidized by H2O2. Unlike traditional iron chelators, which can disrupt iron homeostasis, these pro-chelators have a protective mask consisting of various boronic esters that react and reveal a phenolic oxygen selectively by H2O2. Studies on kinetics of oxidation by H2O2, solubility, iron affinity, and stability in various conditions have been established.