Gendering the Conservative Party’s Rise From The Ashes, 1945-51 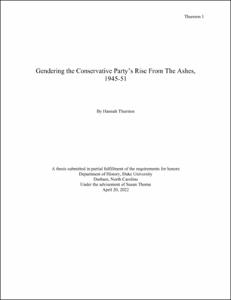 View / Download
23.5 Mb
Date
Author
Thurston, Hannah
Advisor
Thorne, Susan
Repository Usage Stats
24
views
16
downloads
Abstract
The Conservative Party’s shock defeat to Clement Attlee’s Labour Party at the 1945 British General Election cast the party into a period of profound crisis. For the first time in its history, the Labour Party succeeded in securing an outright majority in the House of Commons. Their victory was carried by the collective sentiment of the People’s War which was forged under the hardship of the Home Front, and spurred by Labour’s promise of a brighter future. However, despite this early postwar momentum, just 6 years later, the Conservative Party and Winston Churchill had been restored to government, thus appearing to halt Attlee’s Socialist experiment. How the Conservative Party completed this remarkable electoral recovery is the subject of this thesis. During the party’s postmortem after defeat in 1945, it discovered that while a majority of women had supported the Labour Party, women were far more likely to vote Conservative than men. Thus, it appeared that women held the key to the revival of their electoral fortunes and given the party’s long history of women’s mobilization, it was women to whom they turned. What emerged was a distinct Conservative feminism that on one hand, recognized the changes to women’s roles in the aftermath of war and on the other, spoke to their longing for the security and stability of a quiet family life. This new conservatism mobilized women in their political and professional capacities, whilst at the same time continued to embrace the ideological comforts of tradition and family life. The emergence of a 12-point gender gap favoring the Conservative Party at the 1951 General Election is testament to the success of this campaign.
Type
Honors thesis
Department
History
Subject
Conservative party
British History
20th Century
Women
Gender
Permalink
https://hdl.handle.net/10161/24962
Citation
Thurston, Hannah (2022). Gendering the Conservative Party’s Rise From The Ashes, 1945-51. Honors thesis, Duke University. Retrieved from https://hdl.handle.net/10161/24962.
Collections
More Info
Show full item record