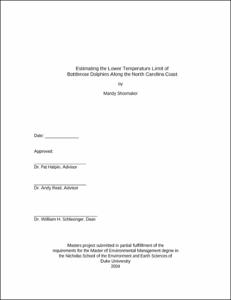 View / Download
101.2 Kb
Date
Author
Shoemaker, Mandy
Advisor
Halpin, Patrick N
Repository Usage Stats
523
views
372
downloads
Abstract
During winter, the coastal ecotype of bottlenose dolphins are at the northern limit of their range off the coast of North Carolina. In this study, the distribution of coastal bottlenose dolphins in North Carolina was evaluated in response to variation in sea surface temperature to determine whether the distribution of dolphins was limited directly or indirectly by winter temperature minima. Observations of dolphin distribution were obtained from monthly aerial surveys conducted along the North Carolina coast during February 2000 through July 2001. Sea surface temperatures were obtained for each survey from NOAA’s Pathfinder satellite, using PO.DAAC Ocean ESIP Tool (POET). Where necessary, the sea surface temperature data was interpolated (krigged) over areas of cloud cover. The northern latitudinal and lower temperature distribution was determined for each survey. During winter months bottlenose dolphins were not distributed throughout their known range of 10-32 °C. Dolphins may be limited directly by temperature, due to the limits of their thermal neutral zone, or indirectly by temperature, through distribution of their prey. To determine how temperature is affecting dolphin distribution in the Western North Atlantic, future research should focus on determining the thermal neutral zone of dolphins in this region. In addition, it would be useful to build a model including other dynamic factors that may affect dolphin distribution. Although results suggest that more research is necessary, there is potential for using results from this type of analysis for management.
Type
Master's project
Department
Nicholas School of the Environment and Earth Sciences
Subject
Bottlenose dolphins (Tursiops truncatus)
Tursiops truncatus
Coastal
strategic stocks
distribution
surface sea temperature
North Carolina
Western North Atlantic
spatial analysis
Geographic Information System (GIS)
Permalink
https://hdl.handle.net/10161/250
Citation
Shoemaker, Mandy (2004). Estimating the Lower Temperature Limit of Bottlenose Dolphins Along the North Carolina Coast. Master's project, Duke University. Retrieved from https://hdl.handle.net/10161/250.
Collections
More Info
Show full item record