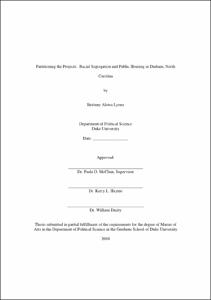 Racial residential segregation is an enduring feature of America's urban landscape. Patterns of residence have become so divided along racial lines, in fact, that many social scientists have described this phenomenon as an "American Apartheid" that is justified and enforced in practice, if not codified in law. With the rise of public housing in the 1960s, the segregation of racial minorities, and particularly African Americans, reached a new level. Indeed, individuals living in public housing experience such a high degree of social and political isolation that they effectively became members of their own city within the larger metropolis.

This research examines racial segregation in public housing in Durham, a medium-sized city in North Carolina. Specifically, I sought to address why the majority of public housing projects in Durham are located in areas that are racially segregated and secondly, what role public policy has played in creating this outcome. To address this question, I utilized decennial census data from 1950 to 2000, with the tract level as the primary unit of analysis, and archival resources pertaining to housing policies in the 1960s. The conclusions reached are twofold. Firstly, the current high degree of segregation in the Southeast section of the city is the result of policy decisions on the part of the City of Durham in conjunction with the Durham Housing Authority in the late 1960s. Secondly, rising levels of segregation in northeast Durham is a consequence of the concentrated placement of public housing in this area in the late 1960s and early 1970s, and the continuance of this policy today. Racial segregation in public housing in Durham is in this way an ongoing issue that profoundly affects not only the individuals living in public housing, but also political society at large.