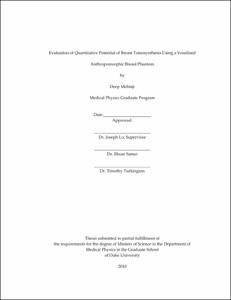 <bold>Purpose:</bold> To assess the quantitative potential of breast tomosynthesis by estimating the percent density of voxelized anthropomorphic breast phantoms.

<bold>Methods and Materials:</bold>A Siemens breast tomosynthesis system was modeled using Monte Carlo methods and a voxelized anthropomorphic breast phantom. The images generated by the simulation were reconstructed using Siemens filtered back-projection software. The non-uniform background due to scatter, heel effect, and limited angular sampling was estimated by simulating and subtracting images of a uniform 100% fatty breast phantom. To estimate the density of each slice, the total number of fatty and glandular voxels was calculated both before and after applying a thresholding algorithm to classify voxels as fat vs. glandular. Finally, the estimated density of the reconstructed slice was compared to the known percent density of the corresponding slice from the voxelized phantom. This percent density estimation comparison was done for a 35%- and a 60%-dense 5cm breast phantom.

<bold>Conclusion:</bold> The errors in slice density estimation were <8% for both the phantoms thus implying that quantification of breast density using tomosynthesis is possible. However, limitations of the acquisition and reconstruction process continue to pose challenges in density estimation leading to potential voxel to voxel errors that warrant further investigation.