Forgetting to Remember: The Creation of Seventeenth-Century French Calvinist Identities under the Edict of Nantes 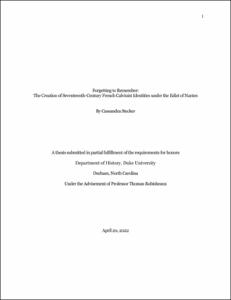 View / Download
1.4 Mb
Date
Author
Stecker, Cassandra
Advisor
Robisheaux, Thomas
Repository Usage Stats
57
views
32
downloads
Abstract
The history of Calvinism plays an important role in any comprehensive history of reformed Christianity. This thesis is interested seventeenth century French Huguenots who lived under the Edict of Nantes, a treaty which ended France’s Wars of Religion and allowed Calvinists to live in France’s Catholic Kingdom as a religious minority between 1598 and 1685. My research explores a decisive development that quietly shaped French Calvinism during this era: the creation of a new Calvinist identity forged in the unique environment of the Edict of Nantes which sought to reconcile the Huguenots’ position as Calvinists pledging loyalty to a Catholic King. The evidentiary source base for this project draws from three main bodies of work: the correspondence of Huguenot pastor Jean Daillé, the sermons of Jean Daillé, and the acts of the reformed Synods. Daillé’s correspondence with Calvinist colleagues is available in a typescript compilation by amateur French historian Jean Luc Tulot based on his visits to the University Library of Geneva where the letters are archived. Tulot’s compilation consists of 216 pages of French correspondence. All featured translations in this thesis are mine. Sermons of Jean Daillé published for distribution and available digitally on the ProQuest archive serve as another key primary source for this project. Finally, John Quick’s translation of the Acts of the Reformed French Synods, Synodicon in Gallia Reformata, constitute a significant portion of this thesis’ primary source base. This thesis argues that the particular environment fostered by the Edict of Nantes compelled the Huguenots to refine both their Calvinist theology and their French identity as a result of their engagement with the Catholic monarch. Chapter one focuses on the Edict of Nantes’ provisions for oubliance, or mandated forgetting, and the way that Jean Daillé replaced memory of the Wars of Religion with new Calvinist memory of Christian suffering which he made central to Huguenot theology as relayed in his sermons. Chapter two examines the Synod of Charenton in 1631 and argues that King Louis XIII and the Huguenots reconstructed the National Synod to serve a political purpose, which is tracked through the reign of Louis XIV in 1660 to demonstrate that the Huguenots attempted to theologically reconcile their Calvinist convictions with their French national identity. This thesis is the first work chiefly focused on the National Synods under the Edict of Nantes as a tool of negotiation and communication between the King and the Calvinists. My research brings together approaches and perspectives from religious history and political history to reconcile inconsistencies in the status of the French Huguenots under the Edict of Nantes not yet explained by historians.
Type
Honors thesis
Department
History
Subject
Calvinism
France
Huguenot
seventeenth-century
Louis XIV
Louis XIII
Permalink
https://hdl.handle.net/10161/25021
Citation
Stecker, Cassandra (2022). Forgetting to Remember: The Creation of Seventeenth-Century French Calvinist Identities under the Edict of Nantes. Honors thesis, Duke University. Retrieved from https://hdl.handle.net/10161/25021.
Collections
More Info
Show full item record