"A New England in All But Name" 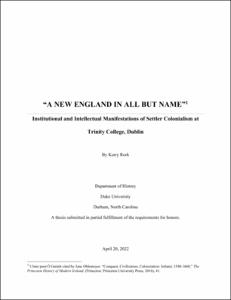 View / Download
1.1 Mb
Date
Author
Rork, Kerry
Advisor
Stern, Philip
Repository Usage Stats
32
views
30
downloads
Abstract
“Settler colonialism” emerged as an analytical tool in the twentieth century as scholars attempted to both understand and reckon with the history of colonization. It describes a distinct means of conquest that relies on the replacement of a native population with a settler group in the form of the elimination or displacement of a people and/or a culture. This thesis explores the traditional settler colonial framework within the context of Trinity College, Dublin. Founded in 1592, Trinity College functioned to control the Irish population and solidify the settler group who will later be known as the “Anglo-Irish.” Yet, just as Ireland was ambiguous, Trinity College was ambiguous, as both sit uncomfortably within the framework of settler colonialism. For the purposes of this work, I rely on three historical periods: Trinity’s foundation, Trinity and the long eighteenth century, and finally, Trinity in the twentieth century. In the first chapter, I examine Trinity College’s founding goals of simultaneously assimilating Gaelic Irish and ensuring that the New English remain within Ireland. Chapter Two focuses on the period of globalization and revolution of the long eighteenth century. I explore the methods by which Trinity College and its scholars challenged and modified revolutionary ideas within the Irish context. And, finally, in Chapter Three, I show how Trinity College administration and scholars manipulated and mobilized Trinity’s history to defend their place as a settler colonial institution within the new Irish Free State. These three periods provide a means of understanding the framework of settler colonialism within Ireland and its outcomes in the formation of the “Anglo- Irish.” I rely on the work of Trinity College scholars and administration, legislation within Ireland, and documentation of Trinity College’s history. Trinity College’s interactions throughout its history provide a glimpse of the Irish colonial tension. Settler colonialism requires institutions that we may not think of as colonial, like universities. Yet such institutions and the people within them often operate as distinct and even oppositional agents. This work helps to provide a means of assessing and reexamining the institutional and intellectual role within the framework of settler colonialism within Ireland. Doing so becomes critical, especially as many of these institutions now must reckon with their legacies in the postcolonial world.
Type
Honors thesis
Department
History
Subject
Settler Colonialism
Colonialism
University History
Universities
Empire
Permalink
https://hdl.handle.net/10161/25024
Citation
Rork, Kerry (2022). "A New England in All But Name". Honors thesis, Duke University. Retrieved from https://hdl.handle.net/10161/25024.
Collections
More Info
Show full item record