Exploring Relationships with Food, Body, and Exercise at an Elite University: Determinants of Patterns of Disordered Eating 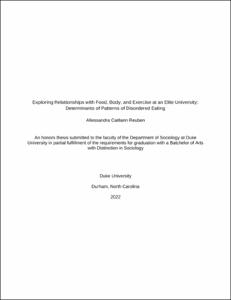 View / Download
431.1 Kb
Date
Author
Reuben, Allessandra
Advisor
Febbo, Dr. Maria
Repository Usage Stats
150
views
43
downloads
Abstract
Diet culture, or the pervasive and far-reaching societal norms that emphasize thinness and control over one’s diet and exercise, tends to become even more pervasive during transition periods, such as when one leaves home to attend college. In this pursuit of thinness, adolescent women are at great risk of developing subsequent patterns of disordered eating. There are also correlates to disordered eating that are well established by the time one transitions to college. Therefore, I examined the associations between membership at an elite university and eating behaviors, particularly trying to understand the mediating factor(s) between undergraduate students and patterns of disordered eating, and how those early developed eating behaviors persist as the individuals enter college. The findings show that mothers, who have also themselves been the victims of diet culture, can be seen as a mechanism through which disordered eating cognitions and behaviors are perpetuated, and that the impact of this influence is early and enduring and represents a vicious cycle that young women find themselves in. It also seems, however, that the internalization of diet culture and beauty standards, and already present patterns of disordered eating can be worsened and escalated upon arrival to college. Furthermore, the increased academic stress that an elite university like Duke poses can be seen as a factor to patterns of disordered eating as well, as participants explicitly mentioned the stress of Duke, the idealized body and diet standards across campus, and that stress was a common determinant of binge eating and other disordered eating behaviors and cognitions. These disordered cognitions and behaviors can manifest in various ways, but are pervasive and are often exacerbated in times of negative affect and in an attempt to change one’s body shape, weight, or to feel a sense of control or reward through restriction.
Type
Honors thesis
Department
Sociology
Subject
diet culture
disordered eating
eating disorder
elite university
eating behaviors
Permalink
https://hdl.handle.net/10161/25025
Citation
Reuben, Allessandra (2022). Exploring Relationships with Food, Body, and Exercise at an Elite University: Determinants of Patterns of Disordered Eating. Honors thesis, Duke University. Retrieved from https://hdl.handle.net/10161/25025.
Collections
More Info
Show full item record