Soldiers of Yellowstone: The Role of the U.S. Army in the World’s First National Park 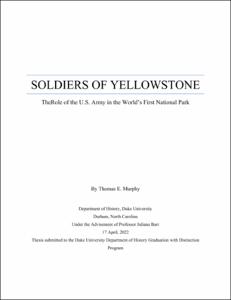 View / Download
3.7 Mb
Date
Author
Murphy, Thomas
Advisor
Barr, Juliana
Repository Usage Stats
49
views
40
downloads
Abstract
By the 1860s, the United States’s colonization of the West was reaching its peak. Not even the most challenging terrain could escape European-American exploration, as was proven when groups began to enter the Yellowstone region in 1869. Within three years, the spectacle and promise of the area prompted lawmakers to designate Yellowstone as the world’s first National Park. That designation led to many questions, though; what was a National Park? How should it be managed? Who would do the work of maintaining it? After over a decade of uncertainty, the U.S. Cavalry was eventually given the responsibility of keeping the Park in 1886, and would go on to hold that responsibility until 1918. Throughout the periods of exploration, of Native conflicts, and of Army management, the role of the military in Yellowstone’s history has left an indelible mark on the people and the landscape of Wyoming, Montana, and Idaho. All through this period, the motivation was the search for value; while the Army had initially sought a strategic use for the landscape, their discoveries only invited profit-seeking ventures. When Yellowstone proved to have greater economic value than strategic, the Army moved away from its original mandate to defend and facilitate that economic usage.
Type
Honors thesis
Department
History
Subject
U.S. Army
National Parks
Yellowstone National Park
U.S. Cavalry
Environmental History
Native American History
Permalink
https://hdl.handle.net/10161/25027
Citation
Murphy, Thomas (2022). Soldiers of Yellowstone: The Role of the U.S. Army in the World’s First National Park. Honors thesis, Duke University. Retrieved from https://hdl.handle.net/10161/25027.
Collections
More Info
Show full item record