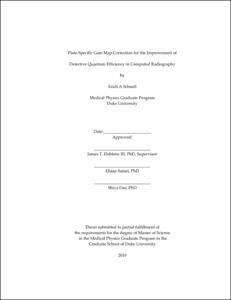 View / Download
1.1 Mb
Date
Author
Schnell, Erich A.
Advisors
Dobbins, James
Samei, Ehsan
Das, Shiva
Repository Usage Stats
2,542
views
372
downloads
Abstract
The purpose of this work is to improve the NPS, and thus DQE, of CR images by correcting for pixel-to-pixel gain variations specific to each plate. Ten high-exposure open field images were taken with an RQA5 spectrum, with a sixth generation CR plate suspended in air without a cassette. Image values were converted to exposure, the plates registered using fiducial dots on the plate, the ten images averaged, and then high-pass filtered to remove low frequency contributions from field inhomogeneity. A gain-map was then produced by converting all pixel values in the average into fractions with mean of one. The resultant gain-map of the plate was used to normalize subsequent single images to correct for pixel-to-pixel gain fluctuation. The normalized NPS (NNPS) for all images was calculated both with and without the gain-map correction. The NNPS with correction showed improvement over the non-corrected case over the range of frequencies from 0.15 –2.5 mm-1. At high exposure (40 mR), NNPS was 50-90% better with gain-map correction than without. A small further improvement in NNPS was seen from careful registering of the gain-map with subsequent images using small fiducial dots, because of slight misregistration during scanning. CR devices have not traditionally employed gain-map corrections common with DR detectors because of the multiplicity of plates used with each reader. This study demonstrates that a simple gain-map can be used to correct for the fixed-pattern noise and thus improve the DQE of CR imaging. Such a method could easily be implemented by manufacturers because each plate has a unique bar code and the gain-map could be stored for retrieval after plate reading. These experiments indicated that an improvement in NPS (and hence, DQE) is possible, depending on exposure level,over all frequencies with this technique.
Type
Master's thesis
Department
Medical Physics
Subject
Calibration
Radiographic Image Enhancement
Permalink
https://hdl.handle.net/10161/2503
Citation
Schnell, Erich A. (2010). Plate-specific gain map correction for the improvement of detective quantum efficiency in computed radiography. Master's thesis, Duke University. Retrieved from https://hdl.handle.net/10161/2503.
Collections
More Info
Show full item record