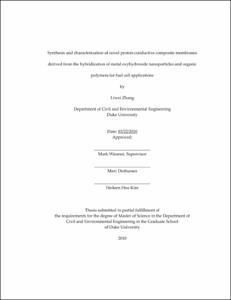 The SEM images of ferroxane (carboxylate FeOOH) + PVA composites revealed that there was significant aggregation among ferroxane nanoparticles in the composite, which results in a decrease of specific surface area of ferroxane and a drop of protonic conductivity of the composite at low RHs.

Based on the findings achieved in this paper, it would appear that the FeOOH + PVA composite membranes are like Nafion, limited with respect to low protonic conductivities at low RHs. To overcome this drawback, several possible approaches are proposed, including the exploration of selection methodology for quick pick-up of polymers that can work well at low RHs, prevention of nanoparticles from aggregation during the preparation process, exploration of new metal oxyhydroxide nanoparticles that may possess high protonic conductivity at low RHs and synthesis of composite membrane that can endure high-temperature sintering.