Metamorphoses of the Muse: Rethinking Gender and Creativity in German Poetry from 1800-1850 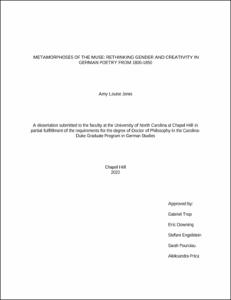 View / Download
921.8 Kb
Date
Author
Jones, Amy Louise
Advisors
Trop, Gabriel
Downing, Eric
Engelstein, Stefani
Pourciau, Sarah
Prica, Alexsandra
Repository Usage Stats
35
views
11
downloads
Abstract
For a significant part of Western European literary history, the muse has been imagined as a female human figure who inspires and entices a male artist with her beauty. This female muse is passive, while the male artist is active. My project unearths a more varied literary history of muse figures in German Romantic and post-Romantic literature, especially poetry, as a genre often associated with the invocation of the muse. The muse figure, while often hidden in the shadows of the more common genius figure, appears in the discourse about creativity and procreation from the mid-eighteenth century onward. Both muse and genius represent the unknown energy and vitality behind the creative act. In nineteenth-century Romantic and post- Romantic texts, such as those by the poets Karoline von Günderrode, Annette von Droste- Hülshoff, and Heinrich Heine examined here, the classical muse figure is reimagined and reinterpreted as an embodied figure – not always human – with which the poet figure in a text must interact. The muse figure takes unexpected forms such as the corpse, the vampire, or the flower. In contrast to the discourse about the solitary male genius, sole authority over his work, the discourse about the muse is one of collaboration. The unconventional muse figures I notice in these texts challenge the normative expectations for the poet/muse roles and for their relationship. In some cases, the poet-muse relationship unsettles philosophical binaries such as gender (male/female), species (human/non-human), organic state (life/death), and agency (active/passive). The variety of new poet/muse relationships that arise in Romantic and post- Romantic texts respond to contemporary aesthetic, philosophical, and scientific trends and flourish into a broad array of possible creative paradigms. Many of these paradigms explicitly challenge pre-existing patriarchal paradigms of creativity, while others do so implicitly. This project therefore attempts to look at the German Romantic and post-Romantic muse through a queer lens, remaining attentive to the unconventional, non-normative, and novel facets of the poet/muse relationship.
Type
Dissertation
Department
German Studies
Subject
German literature
Permalink
https://hdl.handle.net/10161/25041
Citation
Jones, Amy Louise (2022). Metamorphoses of the Muse: Rethinking Gender and Creativity in German Poetry from 1800-1850. Dissertation, Duke University. Retrieved from https://hdl.handle.net/10161/25041.
Collections
More Info
Show full item record