A Transcendent View of Things: The Persistence of Metaphysics in Modern German Lyric Poetry, 1771-1908 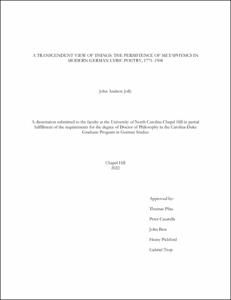 View / Download
2.7 Mb
Date
Author
Jolly, John
Advisors
Pfau, Thomas
Casarella, Peter
Betz, John
Pickford, Henry
Trop, Gabriel
Repository Usage Stats
34
views
11
downloads
Abstract
My dissertation explores the lyric poetry of Johann Wolfgang von Goethe, Eduard Mörike, and Rainer Maria Rilke, and it contends that these modern poets retain, albeit uneasily, a view of things as symbols of the transcendent divine. It thus disputes the secularization theory of post- Enlightenment aesthetics. This study specifically challenges the view of symbolism as mere metaphor—an image constructed of arbitrary signs (Nietzsche)—by showing how the epiphanies of modern lyric poetry remain grounded in the metaphysics of analogia, even where (as in Mörike) the writer seems to have left such entanglements behind. The modern poet’s desire to unveil a significant reality beyond subjective impression reveals that symbolic vision necessarily unfolds within the difference between the visible world and the transcendent divine. If signification entails likeness, yet lyric poetry always signifies in and through difference, then a constitutive analogy—that is, the simultaneity of likeness and even greater difference—emerges from within the dynamism of the lyric image itself. Part 1 begins by describing the symbolic image in Goethe’s lyric poetry to recover his view of things as expressing the “holy open mystery” of the cosmos. I show how his symbolism overcomes Enlightenment naturalism by drawing on the antecedent order of analogia. Thus, it reveals the partial yet indisputable relatedness of things to the transcendent. Turning to Mörike, part 2 charts his transition to an equivocal understanding of the symbol that would sever the image from its numinous source of significance by confining the image to the scope of the poet’s own gaze. Yet Mörike’s poetry also evinces a counter-veiling tendency to de-subjectivize the image, thus yielding a vision of things as they are prior to epistemic concerns, sentiment, and subjective preference. Part 3 contends that Rilke’s thing-poetry evinces a similar tendency to neutralize modernity’s biases against metaphysics. For, his poetry recovers an apophatic understanding of symbolism that draws on Dionysian theology. His poems thus focus our attention on the thing’s unfathomable capacity for initiating a vision of the divine, of which the thing itself is a partial and fleeting manifestation.
Type
Dissertation
Department
German Studies
Subject
German poetry
Permalink
https://hdl.handle.net/10161/25043
Citation
Jolly, John (2022). A Transcendent View of Things: The Persistence of Metaphysics in Modern German Lyric Poetry, 1771-1908. Dissertation, Duke University. Retrieved from https://hdl.handle.net/10161/25043.
Collections
More Info
Show full item record