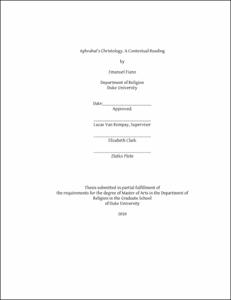 The present study represents an attempt at reading the views on Christ of fourth-century Syriac writer Aphrahat, author of 23 <italic>Demonstrations</italic>, within the context of coeval developments in Christian thought, especially in Syria. Given the breadth of the set of questions posed by the topic, these pages are not conceived as an exhaustive treatment, but rather as a series of incursions into a complicated terrain. The first chapter shows how scholars studying Aphrahat's Christology have often worked, more or less outspokenly, on the basis of confessional and dogmatic assumptions. I will argue for a change in this regard. The second chapter discusses the Syriac version of the so-called "Eunomian interpolation" found in Pseudoclementine <italic>Recognitions</italic> 3.2-11, and attested in Latin and Syriac. Through a work of contrasting and comparing the two versions of the text, I will examine the strategies of which the Syriac translator availed himself to moderate the anti-Nicene peaks of the Greek original. The peculiar characteristics of this translation need to be understood, I will suggest, as a token of the livelihood and conflictiveness of Syriac Christianity around the half of the fourth century. Against the same backdrop, presenting competing models for understanding the figure of Christ, I will propose that we read the complex Christological speculation developed by Aphrahat in his <italic>Dem.</italic> 17. The third chapter of the study interprets the seventh paragraph of this <italic>Demonstration</italic>, recounting the story of the creation of Adam in a highly unusual manner, as a coherent Christological discourse, rather than a mere digression. In that section we witness, I will argue, a synthetic integration of Adamitic Christology with the scheme of the <italic>prolatio</italic> of the Logos, and a dynamic engagement, on the part of the Persian Sage, with contemporary theological debates. The study does not reach overall conclusions about the tenets of Aphrahat's Christology, rather presenting itself as an invitation to take this author out of the intellectual isolation in which he has long been kept by scholars.