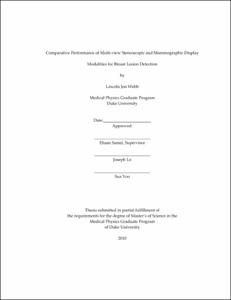 View / Download
4.3 Mb
Date
Author
Webb, Lincoln Jon
Advisors
Samei, Ehsan
Lo, Joseph
Yoo, Sua
Repository Usage Stats
412
views
362
downloads
Abstract
PURPOSE: Mammography is known to be one of the most difficult radiographic exams to interpret. Mammography has important limitations, including the superposition of normal tissue that can obscure a mass, chance alignment of normal tissue to mimic a true lesion and the inability to derive volumetric information. It has been shown that stereomammography can overcome these deficiencies by showing that layers of normal tissue lay at different depths. If standard stereomammography (i.e., a single stereoscopic pair consisting of two projection images) can significantly improve lesion detection, how will multiview stereoscopy (MVS), where many projection images are used, compare to mammography? The aim of this study was to assess the relative performance of MVS compared to mammography for breast mass detection. METHODS: The MVS image sets consisted of the 25 raw projection images acquired over an arc of approximately 45 degrees using a Siemens prototype breast tomosynthesis system. The mammograms were acquired using a commercial Siemens FFDM system. The raw data were taken from both of these systems for 27 cases and realistic simulated mass lesions were added to duplicates of the 27 images at the same local contrast. The images with lesions (27 mammography and 27 MVS) and the images without lesions (27 mammography and 27 MVS) were then postprocessed to provide comparable and representative image appearance across the two modalities. All 108 image sets were shown to five full-time breast imaging radiologists in random order on a state-of-the-art stereoscopic display. The observers were asked to give a confidence rating for each image (0 for lesion definitely not present, 100 for lesion definitely present). The ratings were then compiled and processed using ROC and variance analysis. RESULTS: The mean AUC for the five observers was 0.614 +/- 0.055 for mammography and 0.778 +/- 0.052 for multiview stereoscopy. The difference of 0.164 +/- 0.065 was statistically significant with a p-value of 0.0148. CONCLUSIONS: The differences in the AUCs and the p-value suggest that multiview stereoscopy has a statistically significant advantage over mammography in the detection of simulated breast masses. This highlights the dominance of anatomical noise compared to quantum noise for breast mass detection. It also shows that significant lesion detection can be achieved with MVS without any of the artifacts associated with tomosynthesis.
Type
Master's thesis
Department
Medical Physics
Subject
Algorithms
Breast Neoplasms
Computer Graphics
Humans
Image Processing, Computer-Assisted
Mammography
ROC Curve
Permalink
https://hdl.handle.net/10161/2508
Citation
Webb, Lincoln Jon (2010). Comparative performance of multiview stereoscopic and mammographic display modalities for breast lesion detection. Master's thesis, Duke University. Retrieved from https://hdl.handle.net/10161/2508.
Collections
More Info
Show full item record