Revoked, Restructured or Retained: Examining the effect of external shifts on norm compliance 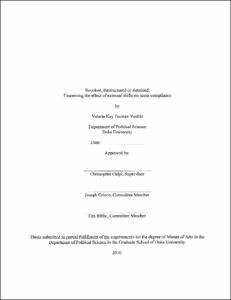 In this work, I use case study analysis to examine the response by states to exogenous shifts in international norms. Specifically, I examine the behavior of states when unforeseen technological advances make the norm previously established between states insufficient to ensure the security needs that were the onus for creating the original norm. I argue that altering the specific clauses of the norm to honor the intention of the norm maintains the habit of compliance and international credibility of the norm, yielding a greater level of acceptance and rate of compliance than if the norm is either discarded and a new norm is sought or if the norm retains in place without being renegotiated.