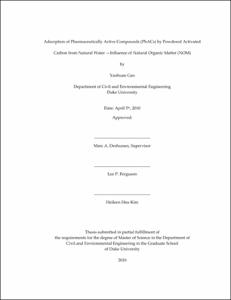 Powdered Activated Carbon (PAC) adsorption was studied in order to determine the influence of natural organic matter (NOM) on the adsorption of two acidic pharmaceutically active compounds (PhACs), clofibric acid and ketoprofen. Suwannee River humic acids (SRHAs) was used as substitute of NOM in natural water. Batch adsorption experiments were conducted to obtain the single compound adsorption kinetics and adsorption isotherm with and without SRHAs in the system. Three main findings resulted from this study. First, the adsorption isotherms showed that the adsorption of clofibric acid was not significantly affected in the presence of SRHAs (5 ppm); however, the adsorption of ketoprofen markedly decreased with SRHAs in the solutions. Higher initial concentrations of clofibric acid than ketoprofen together with the compressed double layer theory helped explain the different behaviors that were observed. Furthermore, the more hydrophobic ketoprofen molecules may increase the possibility that this compound would adsorb less on the surface area which was covered by the more hydrophilic humic acids. Second, the adsorption kinetics of both compounds were not affected by the SRHAs, although more research may be needed, as it is possible that slight differences exist during the initial adsorption phase. Lastly, possible intermolecular forces were discussed and a sequence of importance is proposed for their role in the adsorption process as A). electrostatic forces; B). electron donor-acceptor interaction; C & D). H-bond and London Dispersion forces.